ASEAN as a grouping is a failure, academic insists 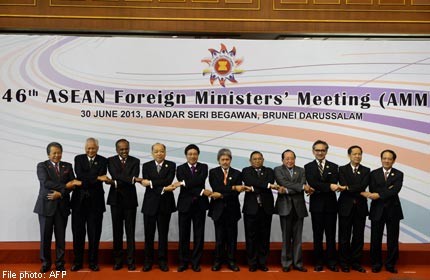 ASEAN as a community has been a failure so far, as the notion of national sovereignty continues to undermine its integration while the identity of the grouping has yet to crystallise, according to Eduardo C Tadem, an associate professor of Asian Studies at the University of the Philippines Diliman.

Though many Thais are waiting for the ushering in of the ASEAN Economic Community (AEC) in 2015, Tadem reckons the regional grouping needs to come up with a new model of integration.

The professor made his presentation at the two-day third International Conference on International Relations and Development at Chulalongkorn University, which wrapped up yesterday. The conference was held by about half a dozen organisations from four universities, including Chulalongkorn's faculty of political science.

Tadem said countries like Singapore and Thailand considered ASEAN a conduit to boost their own exports, leading to clashes between national strategies and the grouping's own goals. He said 20 per cent of the AEC's trade protocols were far too tough and might not be agreed upon by 2015.

He also cited 2010 statistics showing intra-ASEAN trade at just 25 per cent of the entire trade in the 10 member states, compared with 67.3 per cent of intra-trading among European Union members.

Tadem also argued that competition among ASEAN manufacturers was fierce and thus undermined the goal of regional integration. Plus, three countries - Singapore, Malaysia and Thailand - dominate intra-ASEAN trade, accounting for about 70 per cent.

Then there's the free-trade agreements some ASEAN member states have with countries outside the regional bloc, such as Thailand's pacts with New Zealand, Australia and China, which reduces the efficacy of trade agreements within the grouping.

The ASEAN Secretariat, too, is weak and understaffed compared with the EU, Tadem said.

In addition to ASEAN leaders' failure to make any significant joint efforts to tackle the 1997 financial crisis, "in November 2012, ASEAN leaders [still] couldn't agree to set up a crisis hotline", he said.

The ASEAN sceptic went on to cite the failures of the ASEAN Charter, which he said brought the regional human-rights standards lower than those stipulated in the United Nations Charter.

"ASEAN has been silent on the issue of the Muslim Rohingya," Tadem pointed out, adding that he believes China is also dividing the grouping into mainland and maritime ASEAN states - much to the detriment of the regional bloc itself.