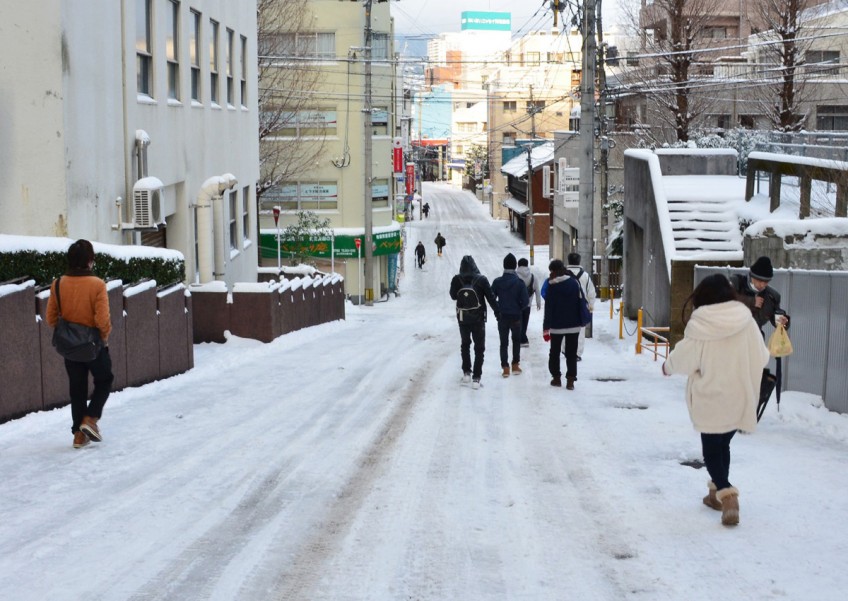 HONG KONG - Snow, sleet and icy winds across Asia caused deaths, flight cancellations and chaos over the weekend as areas used to basking in balmier climates struggled with record-low temperatures.

Weather-related deaths were reported in Japan and Taiwan, with hundreds of flights cancelled across the region, tens of thousands of holidaymakers stranded in South Korea, and freezing conditions in sub-tropical Hong Kong causing mayhem on its tallest peak.

While the cold snap is by no means on the scale of the weather now affecting the snow-bound eastern United States, such temperatures are a novelty for many residents of the region.

In Bangkok, a city that rarely sees the thermometer dip below 20-25 degrees Celsius (68-77 Fahrenheit), temperatures dropped to around 16 degrees late Sunday.

It left people in Bangkok, whose normal attire generally includes flip-flops and shorts, digging through their closets for jackets and jumpers.

He told AFP: "Whoa! The weather is superb. It's been many years since I've experienced this cold. I feel happy, refreshed and relaxed. When it gets too hot, I get a headache."

The small subtropical island of Amami observed snow for the first time since 1901, the Japan Meteorological Agency said.

In China, 24 weather stations around the country recorded all-time low temperatures between Friday and Sunday.

At Eergu'Na in Inner Mongolia, the temperature on Saturday hit a record low of -46.8 degrees.

The southern city of Guangzhou saw rare sleet, the first in 60 years, in its downtown area, the provincial meteorological station announced on Sunday.

In Hong Kong, primary schools and kindergartens were closed Monday after temperatures plunged to a 60-year low.

The peak became the scene of "carnage", as one race official described it, as hundreds of curious "frost-chasing" citizens became stranded, with dozens stricken with hypothermia and hapless firemen called in to rescue them filmed slipping and sliding on the icy roads.

Close to 90,000 people were stranded on the South Korean resort island of Jeju on Monday after the biggest snowfall in three decades shut the airport for the third straight day.

Taipei registered a low of 4 degrees over the weekend, the coldest in 44 years, with the Taiwan media reporting 90 deaths due to the cold weather, and rare snowfall drawing enthusiastic crowds to Yangmingshan National Park.

In Vietnam, temperatures in Hanoi dropped to six degrees at night over the weekend, which state-run media said was the coldest weather the country has experienced for two decades.

Mountainous areas in the country's north, including the popular tourist town of Sapa, experienced light snow. Some primary schools were closed in the capital Monday, officials said.

[[nid:258983]]
SUBSCRIBE TO OUR NEWSLETTER
Your daily good stuff - AsiaOne stories delivered straight to your inbox