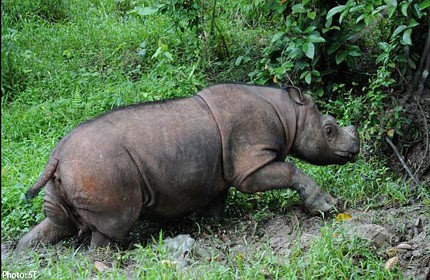 JAKARTA - Environmentalists on Friday hailed measures including tough anti-poaching initiatives to help boost the dwindling population of Asian rhinos agreed at an international conference in Indonesia.

Officials from Bhutan, India, Indonesia, Malaysia and Nepal held a two-day meeting this week on Indonesia's western Sumatra island to discuss the plight of the animals.

Two out of three Asian rhino species - the Sumatran and Javan rhinos - are critically endangered, and the third, the greater one-horned rhino, is classified as vulnerable.

The populations have dwindled rapidly as poachers hunt the animal for its horn which is highly valued for use in traditional Chinese medicine, and the WWF says only around 3,500 rhinos remain in the wild in Asia.

At the meeting of Asian countries with rhino populations in the city of Bandar Lampung, the participants agreed to try and increase the populations of Asian rhinos by at least three percent annually by 2020.

The agreement set out steps to increase the populations, such as improving biological monitoring and management and carrying out tough anti-poaching operations.

Protection group the International Union for Conservation of Nature hailed the agreement as a "major step towards Asian rhino recovery".

"The number of surviving Asian rhinos, especially of Javan and Sumatran rhinos, is currently so low that maintaining their populations is not enough to secure their survival," said Simon Stuart, chair of the IUCN's species survival commission.

"What we need to see is the recovery of these species and a steady increase of their populations."

The WWF hailed the agreement made at the conference, which concluded on Thursday, but urged governments to follow through with concrete action.

"Now is the time for action, to implement these methods where they are needed most," said Dr. Christy Williams, from the WWF's Asian rhino and elephant programme.

The IUCN said there could be fewer than 100 Sumatran rhinos, and there were only an estimated 50 Javan rhinos, remaining in the wild.

There are around 3,300 greater one-horned rhinos mainly in India and Nepal, the IUCN said.

As well as their horns, other rhino parts are also valued in traditional medicine and fetch a high price on the black market.