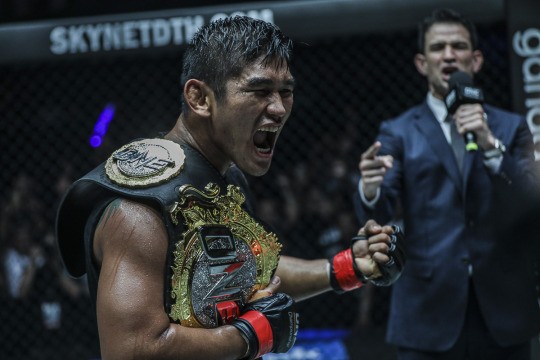 The Thuwunna Indoor Stadium in Yangon, Myanmar was the scene of yet another triumph for ONE Championship and “The Burmese Python” Aung La N Sang on Friday, 26 October.

The two-division ONE World Champion defended his middleweight belt in style in front of his home fans at ONE: PURSUIT OF GREATNESS – knocking out Lebanon’s Mohammad “O Lutador” Karaki in the first round.

It was a near-flawless performance from the 33-year-old, who shook off Karaki’s takedown attempts and fired back with hard punches to the head and body.

Though the challenger survived one knockdown, he could not recover from a left body shot and right hook. He fell, and succumbed to ground and pound, which forced the TKO stoppage at 2:21 of the first round.

Before the local fans could celebrate their hero’s success in the headline bout, however, they were stunned into silence as Keanu Subba faced Phoe Thaw on his home turf, and forced him to submit in the featherweight co-main event.

The Malaysian grappled with the striking specialist from the opening bell, and the hometown hero only lasted 2:47 before he tapped to a guillotine choke.

If an award was handed out for the most relentless offence of the night, Tarik Khbabez would have won it handily after his victory in a light heavyweight ONE Super Series kickboxing bout against Ibrahim El Bouni.

The Moroccan launched a sustained assault on his compatriot for the majority of the contest until proceedings were finally stopped with 34 seconds remaining of round three.

A 67-kilogram catch weight contest between Japanese legend Masakazu Imanari and Radeem Rahman was a late addition to the event, but “Ashikan Judan” showed no signs he was lacking any sharpness because of the short notice.

Imanari quickly started chaining grappling techniques together until he caught his opponent in an armbar – and scored the 26th tapout of his career after the Singaporean signalled for the match to end at 1:23.

Han Zi Hao became the first man to make three ONE Super Series appearances and turned in the most emphatic performance of his time in the world’s largest martial arts organization.

The Chinese athlete knocked out the Philippines’ Ryan Jakiri with a huge right hand to end their bantamweight kickboxing contest after just 99 seconds.

All three judges gave Ye Thway Ne the decision after three rounds, and his record improved to 4-1 with the win.

The first main-card match-up was over in a flash, as Luis “Sapo” Santos returned to the win column with a 33-second knockout of Daichi Abe.

The Brazilian improved his record to 65-11-1 (1 NC) by blasting an explosive left kick into the Japanese athlete’s body, which brought an early end to their welterweight contest.

Australia’s Tonna prevailed by the narrowest of margins after all three judges scored the match in his favour.

Fans were treated to one of the bouts of the night early on, as Afghanistan’s Ahmad Qais Jasoor finished Ma Xu Dong of China via knockout at 2:16 of the second stanza in a bantamweight match-up.

“Lycan” had the best of the first frame, but looked to be slowing down under the weight of some powerful leg kicks from his opponent. However, he hit back to improve to 5-1 in his career.

The night began with flyweight action and a first-round victory for Indonesia’s Rudy Agustian.

“The Golden Boy” took the Philippines’ Kaji “Alpha” Ebin down and controlled him for much of the bout, before finishing him off with an Americana at 4:01.