Australia to build on ties with ‘closest friend’ Japan 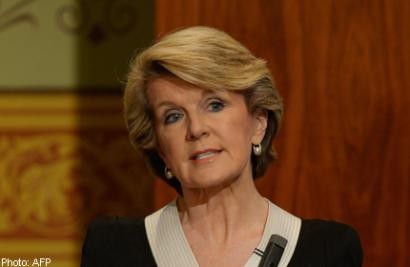 SYDNEY - Foreign Minister Julie Bishop plans to capitalise on Japan being Australia's "closest friend in Asia" by pushing for the conclusion of a free trade deal in a visit next week.

Prime Minister Tony Abbott made the bold declaration, elevating Japan above China and Indonesia, during the recent East Asia Summit in Brunei and Bishop said she wanted to build on the relationship.

"Our longstanding close partnership with Japan is underpinned by shared values and common interests - a commitment to democracy and the rule of law, and to continued regional stability and prosperity," she said Friday.

Bishop added that the "timely conclusion" of the FTA was a key priority for Canberra, as well as enhancing cooperation in regional and global forums.

The two countries, major trading partners with each other, began negotiating an FTA in April 2007 but talks were stalled in 2011 by the earthquake and tsunami disaster which hit the Asian nation.

Abbott has made concluding free trade deals with Japan, China and South Korea a centrepiece of his international diplomatic efforts, and Bishop will also visit Seoul next week in a six-day trip that also takes in Hong Kong.

She is due to travel to China later this year to finalise a long-negotiated FTA with Beijing that Abbott said he wants concluded within a year.

Australia has several bilateral FTA agreements, including with Singapore, Thailand and the United States.