Australian arrested in Bali after going berserk on Kuta road

An Australian man identified as NC suffered wounds and was treated at a hospital after allegedly going berserk in Kuta, Bali, damaging stores, restaurants and vehicles. He has been arrested by the police.

An Australian man identified as Nicholas Carr, 26, has been arrested in Bali after allegedly going berserk on Kuta's Sunset Road, damaging stores, restaurants and vehicles.

A video making the rounds in social media over the weekend purportedly shows Carr running on the street on Saturday and jumping at a passing motorcycle, causing the driver to be thrown off and injured.

The suspect, who was fully clothed but barefoot on the night of the incident, also reportedly threw himself at a moving car while residents chased after him, as seen in a 24-second footage posted by @denpasar.viral on Instagram.

The motorcycle driver, who suffered bruises and a hip injury as a result of the incident, reported Carr to the police. 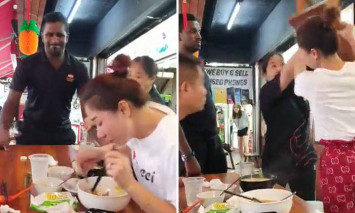 Kuta Police chief Adj. Comr. Teuku Ricki Fadlianshah said the suspect said he was under the influence of alcohol. When Carr was asked by journalists how much he drank, he said "a lot".

The police would later conduct a drug test, Ricki said.

"We urge all foreigners and locals to avoid consuming too much alcohol, so as to not disturb public order in the Kuta area," Ricki said.

At the police station, Carr apologised "to everyone, to victims, the Bali people, to anyone affected by this all." He said he remembered "very little, nothing", except for crashing into "a scooter".