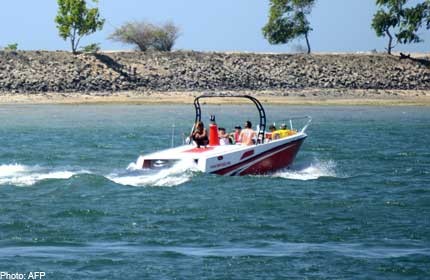 BALI - Popular holiday destination Bali has become a favoured transit point for illegal migrants heading to Australia and other destinations.

"The tiny island of Bali is now facing the problem of illegal immigrants, mostly from the Middle East, involved in human trafficking," noted Governor Made Mangku Pastika during the opening of the sixth Summer Institute in International Humanitarian Law and Human Rights in Sanur on Monday morning.

In May, Bali's water-police directorate arrested 95 illegal migrants - many of them women and children - on a boat near Benoa harbour. They had been en route to Australia.

In the last few years, the Bali police have foiled the attempts of many illegal migrants headed for Australia. The majority of them came from Turkey, Iran, Afghanistan and other Middle Eastern countries.

Many migrants also come to Bali disguised as tourists, spending some time on the island before leaving for Australia by boat.

"Although they create social problems in Bali, we cannot treat them as criminals. They need legal and human-rights protection. We have to treat them properly," Mr Pastika noted.

The presence of illegal migrants has added to the population problems on the already-crowded island.

"We have seen a flood of migrant workers coming to Bali from...across Indonesia. Now, we have to deal with so many illegal immigrants," the Governor said.

Bali has a population of 4.2 million, a significant increase of 600,000 people in the four years since 2008, when the island's population was 3.6 million.

Due to rapid economic development, people from Java, Sumatra, West and East Nusa Tenggara, Ambon and elsewhere in Indonesia have come to Bali to find employment.