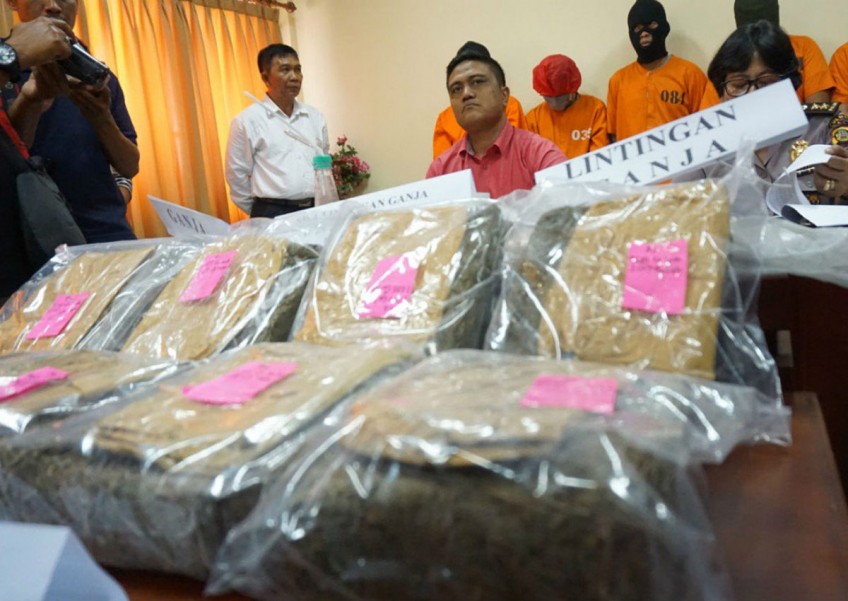 Evidence: Bali Police narcotics detectives present 8.4 kilograms of marijuana seized at a boarding house in Denpasar. The marijuana was allegedly to be distributed to tourist spots on the island.
The Jakarta Post/Asia News Network

The Bali Police narcotics squad arrested one alleged drug courier and three suspected accomplices and seized 8.4 kilograms of marijuana from a boarding house in Denpasar.

The suspected courier, identified only as RFI, had allegedly received direct instruction from an inmate at the Kerobokan Penitentiary.

"RFI only answered to an inmate at the Kerobokan Penitentiary who controls business from inside," the deputy director of the Bali Police narcotics directorate, Adj. Sr. Comr. Sudjarwoko, told journalists on Tuesday.

The marijuana was allegedly to be distributed to tourist spots on the island.

RFI, he said, admitted that he was paid Rp 1.5 million to bring a package containing marijuana from Pasuruan in East Java to Denpasar.

The courier was waiting for further instruction when the police arrested him, Sudjarwoko added.

The three suspected accomplices, identified only as MKW, TAS and MJP, were arrested for alleged possession of marijuana.

The police are currently questioning the four suspects and are seeking information on the syndicate behind the delivery.

RFI will be charged under the Narcotics Law and, if found guilty, could face up to 20 years in prison.

Meanwhile, the three suspected accomplices will be charged under the same law, facing a sentence of up to 15 years in prison if found guilty.