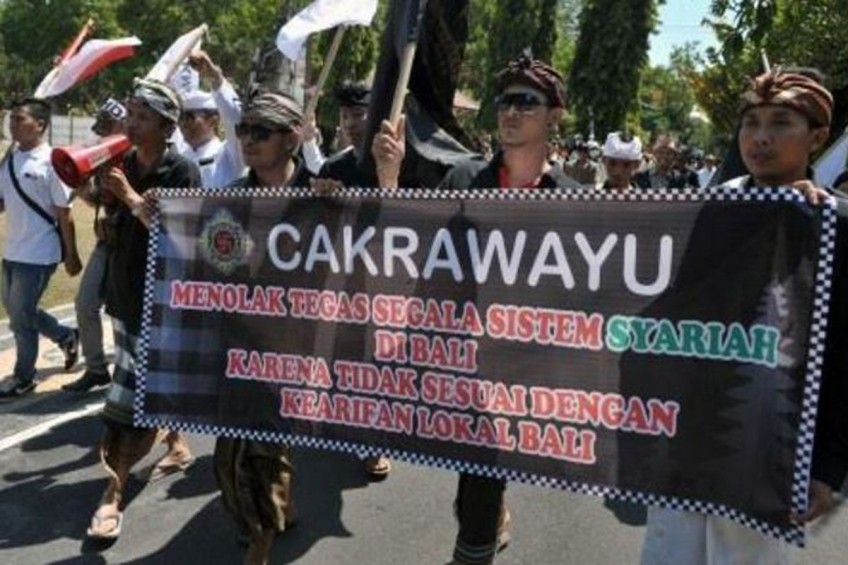 People protest at the Bali Legislative Council (DPRD) compound on Tuesday. Protestors from the Cakrawayu organisation have rejected sharia tourism being developed in Bali.
Antara

Bali Governor Made Mangku Pastika has opposed the idea of developing sharia tourism on the Island of the Gods, saying it had the potential to cause discord on the Hindu-majority province.

Pastika said on Tuesday that tourism in Indonesia's most prominent tourist destination was going well just the way it was.

"I disagree with it. It would only cause an uproar; [tourism] has been running well," he said as quoted by Antara news agency.

"Bali is not suited as a sharia tourist destination because it does not fit in with the essence of the locale. Bali has always had its own culture that is recognised worldwide. So there is no need to make any changes," Ketut Bagus Arjana, the head of the Indonesian Hindu Dharma Student Association, told Antara.

Sharia Economic Society (MES) chairman Muliaman D. Hadad previously said sharia tourism was suitable to be developed in Bali and was worth exploring as a business opportunity.

"We are not talking about religion but economics," said the chairman of the Financial Services Authority (OJK) during an event in Bali earlier this month.

Muliaman said Islamic-based tourism was not only developed in Arab countries. Southeast Asian countries have also developed it, such as Singapore, Malaysia and Thailand.

Thailand was recognised as the world's best Islamic health destination at a recent event in Dubai, the United Arab Emirates, he said.