A handout photo. Thailand’s resort town of Hua Hin has increased in popularity as more wealthy Bangkok residents opt out of city life, with a property boom driven largely by Thais.

Worn out by coronavirus restrictions, pollution and traffic gridlock, wealthy Bangkok residents are buying up bolt-holes in the southern beach retreat of Hua Hin as the pandemic sparks a lifestyle pivot away from the big city.

Famed for its long white sandy beach and rolling green hills, and without the sleazy reputation of the eastern resort of Pattaya, Hua Hin has been a cool-air retreat for Thailand's royals since the early 20th century. About three hours' drive from Bangkok, it has become increasingly popular as an upscale weekend getaway destination.

The old town is known for its seafood restaurants on wooden stilts over the sea, and bars mostly owned by Western retirees. But there are signs of change as slick beach clubs spring up further along the beach for the Bangkok party set, while luxury condos and golf courses dot the surrounding hills.

Property agents say their sales during the pandemic show a new wave of city types are reconsidering their priorities.

Sales so far this year have outpaced both 2019 and 2020 combined, according to luxury developer Banyan Thailand, as Asian buyers - mainly Thais - sweep into an area once better known for its Western expats. Prices range from 8 million baht (S$324,000) for a condo to 80 million baht (US$2.3 million) for villas with land and swimming pools.

"Hua Hin is to Bangkok what the Hamptons is to New York," said Tjeert Kwant, group CEO of Banyan Thailand. "It's a place for people living in the metropolis - especially the higher middle class and the upper class - to escape to, a place where they feel safe, where they have space."

While restrictions on nightlife, restaurants, parks, gyms and malls are slowly being eased, the pandemic has left its mark on Bangkok's residents, especially those living in upmarket or gated areas and normally cocooned from the city's rougher edges.

At the peak of infections in July and early August, those trapped at home looked on in horror as images of people being treated in hospital car parks played out on television, while a shortage of vaccines stunned wealthy families used to getting to the front of the queue through their connections or income.

Hua Hin, which had fewer than 80 deaths and closed only its public spaces during the latest virus wave, has pulled in some of those city exiles.

"Buyers are looking for a place to prepare for unexpected circumstances in advance … properties considered as their safe haven," said Artitaya Kasemlawan of CBRE, Thailand's leading consulting firm. "The market is being driven by Thais."

"We expect jobs to pick up … there's condo demand domestically but it may be a while before foreigners decide to come back and invest."

He cited a real estate development backed by an initial coin offering (ICO) and led by developer Sansiri and The Standard in Hua Hin as an example of the interest in the area's development potential.

Read Also
Can Thailand beat Malaysia and Singapore in the race to lure wealthy foreigners? 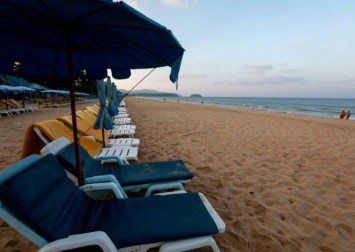 Over 70 per cent of the local population is now fully vaccinated, according to health authorities, meaning the "Hua Hin Recharge" plan to reopen to foreign tourists is on track for Nov 1.

With China still imposing strict controls on re-entry for its citizens, the first tourists are likely to be from Russia and western Europe, looking for winter sun.

But the resort town is looking to Asia for its future. Its small airport is set for expansion work, which will enable it to handle direct flights from as far as China, South Korea and India by 2024.

That bodes well for property prices.

"Our investment was substantial … north of US$1.5 million," said one buyer who preferred to remain anonymous. She left Bangkok for the resort town with her husband and children last year.

"We think in the long term it can only go up - people are realising Hua Hin works well … you don't have to be in the city, you can still work, you can easily commute."

For others, the change of lifestyle is long overdue as Bangkok's notorious traffic returns to its pre-lockdown levels and construction work picks up.

Plern Pratoommas, 38, said the pandemic has confirmed her decision to edge her life away from Bangkok's hustle and towards the beach.

"I get to see the sky every day in Hua Hin and I don't have to hear the constant construction of Bangkok," Plern said. "That feeling - and the spaciousness - is an emotional investment for me and my husband. I need the therapy of nature, which Bangkok totally lacks, especially during lockdowns."