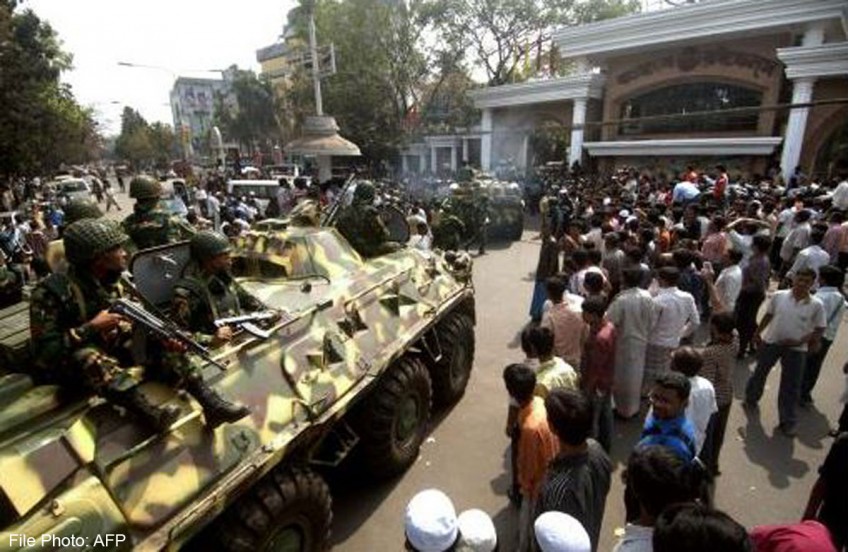 DHAKA - Bangladesh authorities stepped up their siege Monday of opposition leader Khaleda Zia, mounting a blockade of her office to thwart her bid to spearhead protests on the first anniversary of controversial elections.

Trucks laden with sand and bricks were wedged outside the gates of Zia's upmarket Gulshan office in Dhaka and at the mouth of the road leading to the building where she has been confined since Saturday night.

Riot police, flanked by armoured vehicles equipped with water cannon, prevented anyone from entering or leaving the premises, said an AFP journalist at the scene.

"The trucks have been parked in an effort to step up her security," Gulshan police chief Rafiqul Islam told AFP amid heightened tensions in the capital.

Zia, leader of the main opposition Bangladesh Nationalist Party (BNP), has urged activists to take to the streets in their thousands as part of a campaign to force Prime Minister Sheikh Hasina to hold fresh multi-party polls, describing Monday as "Democracy Killing Day".

"She has urged people to join a mass rally today. She would also try to join the protest," Zia's spokesman Maruf Kamal Khan told reporters.

Hasina, who has been in power since 2009, was re-elected on January 5, 2014, in what was effectively a one-horse race after the BNP and around 20 other opposition parties boycotted the polls over rigging fears.

Zia's boycott was sparked by her arch rival's refusal to step down ahead of the election and allow the contest to be organised by a neutral caretaker administration which has organised previous polls.

The boycott by the BNP and its allies meant a majority of members in the 300-seat parliament were returned unopposed, ensuring Hasina's Awami League party another five years in power.

In seats where there were contests, the only challenge came from independents or small parties which were loyal to Hasina.

Voting was overshadowed by firebomb attacks on polling booths and clashes between police and opposition activists, which left around 25 people dead.

Many of the BNP's top leaders have since either been detained or charged in connection with the election violence, hampering efforts to press their case for new polls.

Although Zia has not been officially arrested, hundreds of police cordoned off her office Saturday and prevented her from leaving as she tried to visit a sick colleague.

BNP headquarters in central Dhaka was padlocked by police at midnight on Saturday, with police vans barricading nearby roads.

BNP officials said at least 500 party supporters have been arrested, including two senior party figures, ahead of the poll anniversary.

Scuffles broke out near Zia's office Sunday when a former president, Badruddoza Chowdhury, was turned away from meeting her.

"She is confined. It's an insult to democracy," he said.

Zia's aide and lawyer Khandakar Mahbub Hossain did manage to meet her on Sunday, telling reporters afterwards that she had asked people to "continue protests until the government is toppled".

The violence on election day last year was the culmination of the bloodiest year of political unrest in Bangladesh's short history, with tensions also heightened by the death sentences handed down to leading Islamists over their role in the 1971 independence war.

More than 500 people were killed in political violence in 2013, making it the bloodiest year since Bangladesh split from Pakistan.

While not on the same scale as a year ago, there were several eruptions of violence in towns over the weekend as police fired rubber bullets and tear gas at hundreds of opposition activists.

At least 10 people were injured across the country, police said. In Dhaka more than a dozen vehicles were torched and damaged.