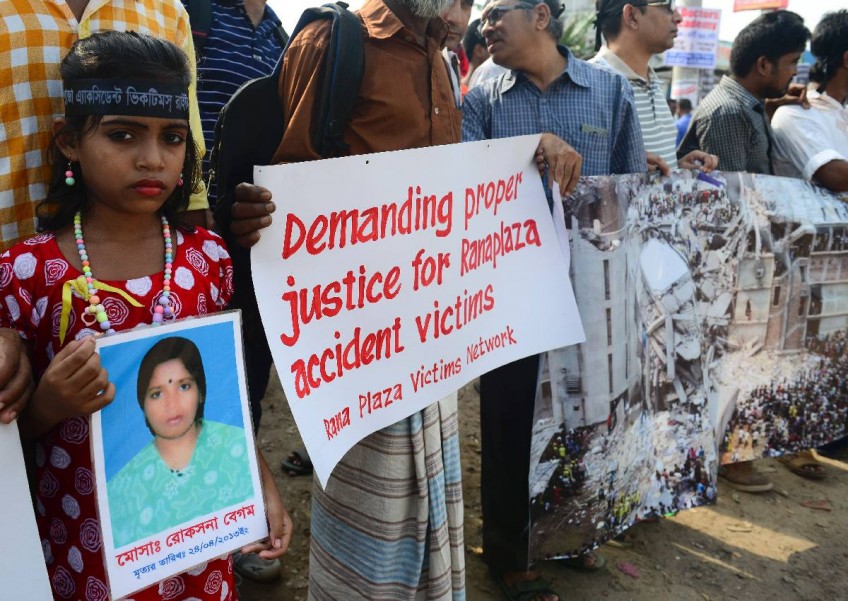 A Bangladeshi girl holds a photo of her mother, who died in the Rana Plaza building collapse, during a protest march on the third anniversary of the disaster at the site where the building once stood in Savar, on the outskirts of Dhaka on April 24, 2016.
AFP

SAVAR, Bangladesh - Thousands of Bangladeshi garment workers demanded justice on the third anniversary Sunday of one of the world's worst industrial disasters, the collapse of the Rana Plaza factory complex with the loss of over 1,100 lives.

Survivors of the disaster, many of whom lost limbs when the nine-storey building imploded, laid flowers and wept as they remembered the dead.

Relatives of those killed, including some whose bodies have never been found, recited verses of the Koran and prayed after gathering from early morning at the site at Savar just outside Dhaka.

"Three years have passed and still we don't see any justice. No one has been held to account for one of history's worst man-made disasters," union leader Abul Hossain said as he led the protest.

Police have arrested and charged the owner of the building with murder, along with 40 others - including factory officials and government inspectors who certified the flimsy complex as safe.

But no one has yet been convicted over the disaster, which ocurred after thousands of workers were forced to enter the building to start their shifts despite cracks appearing in its pillars one day before.

Workers also staged protests in Dhaka on Sunday and outside a state graveyard where hundreds of unidentified victims have been buried, to demand swift trials for those charged.

"Rana must be hanged!" workers shouted, referring to arrested building owner Sohel Rana who is politically influential in Bangladesh.

Others who gathered at the site, which has been turned into a small lake and was Sunday full of hyacinth flowers, called for improved safety at Bangladesh's 4,500 garment factories.

"The government must shut down all faulty factories to avoid another Rana Plaza. It's unfortunate most factories remain unsafe despite such a huge tragedy," said another union leader, Touhidul Islam.

The Rana Plaza tragedy triggered international outrage and put pressure on European and US clothing brands to improve pay and conditions at the factories that supply them.

But only a fraction of Bangladesh's factories - which employ a total of four million workers, mostly women - have since been certified safe.

At the site, dozens of people held laminated photographs of missing loved ones whose bodies were never found.

"Our sole request to the government is please find my sister's body so that my mother, who has been sick, can die in peace," said Lipy Begum, whose sister Kulsum Begum, 16, has been declared dead.