BBC says it will respect Thai laws while maintaining its integrity 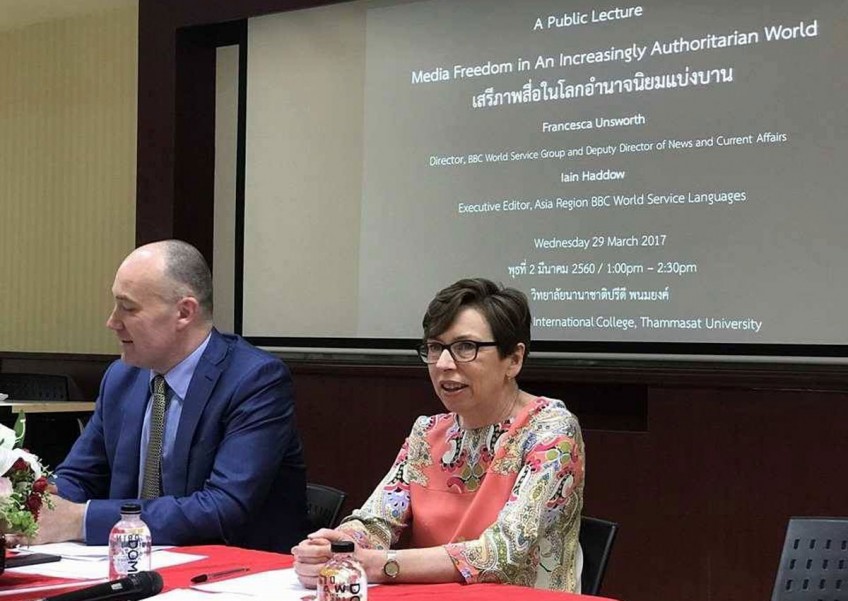 Defending journalists' right to cover justifiable stories while not breaking domestic laws are editorial principles adhered to by the British Broadcasting Corporation (BBC), said a director of the UK-based broadcaster.

The remark was a direct reference to the case in which the BBC via BBC Thai published a controversial article in December that was shared on Facebook by more than 2,000 times, including by activist Jatupat "Pai" Boonpattararaksa, who was charged with violating the lese majeste law and the computer crime bill and is in prison in Khon Kaen.

Other consequences of the story included police visiting BBC's Thai office in Bangkok, with staff there keeping a low profile in the following months.

The Government's Deputy Spokesman Lt-General Werachon Sukondhapatipak also went to BBC headquarters in London after the article was posted on the BBC Thai website and he met with BBC executives.

The BBC's World Service Group director Fran Unsworth said the BBC explained to him its editorial values and ensured him it would abide by the laws of the country for the safety of its staff.

"It's important to note that the article in question was written and published at the BBC head office in London," Unsworth said. "No BBC Thai staff based in Thailand played any part in writing or publishing the article. Nor did our Bangkok-based news-gathering staff."

The BBC does not wish to offend anyone, she said, "least of all the Royal family".

Unsworth, together with the BBC's executive editor for Asia, Iain Haddow, spoke about media freedom in an increasingly authoritarian world at a special classroom lecture at Thammasat University's Tha Pra Chan campus on Wednesday.

Despite the talk's rather controversial title, it did not attract military officers, who often observe public discussions deemed by the junta government to be critical to "national security".

The lecture was organised in a rather closed manner, with around 30 students and only three journalists attending the session.

Apart from remarks on Thailand, Unsworth's lecture mostly touched on authoritarian trends on the global landscape, media struggles and how the freedom of media should be defined amid this atmosphere.

On Thursday, the director will attend a discussion on global media digitalisation at Chulalongkorn University and be joined by Nation Multimedia Group editor Thepchai Yong.