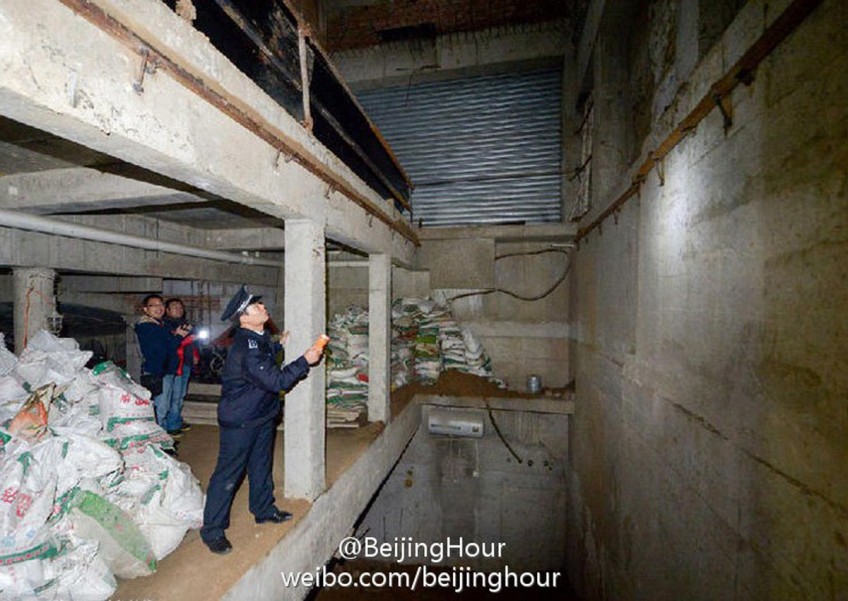 A basement illegally dug under a house in Beijing was exposed Friday, less than one year after excavation in a courtyard in the city's Xicheng District led to a road cave-in and the collapse of neighborhood houses.

The illegal basement, the largest found in Beijing, was built under two adjacent houses in Shaluo Hutong, Dongcheng District. It is spread out over about 700 square meters spread across three floors underground and the deepest point is 10 meters, according to a preliminary measurement, said Yan Jianheng, director of demolition office dealing with illegal construction in Dongcheng District.

The property owner, surnamed Li, bought the houses in 2008 and registered them under his and his son's names, law enforcement officials said.

The owner, who is in his 50s, operates a car rental company, and planned to use the basement as a garage, according to people familiar with the matter. When the digging work was finished, the basement was to have accomodated 100 cars.

He hired part-time workers for the construction after designing the underground parking lot. To avoid notice, they used shovels instead of large machines and worked from midnight to early morning.

Officials from Beijing Municipal Commission of Housing and Urban-Rural Development said they have invited a third-party institution to evaluate the basement. If it endangers public security, the case will be handed over to the police.

Li will face an administrative penalty, with a maximum fine of 10 per cent of the overall construction costs.

In January, workers illegally digging a basement under a courtyard on Deshengmen Inner Street, Xicheng District, caused a street surface to collapse. Traffic on the northern second Ring Road of downtown Beijing was interrupted and four houses nearby collapsed.

The cave-in resulted in a crater 15 meters long, 5 meters wide and 10 meters deep. The accident later shocked the country after it turned out that the owner, Li Baojun, was a legislator in Xuzhou, a city in East China's Jiangsu province.

An investigation by Beijing News reporters shows that building a basement under a courtyard is gaining momentum in the capital. The reason is practical and economical - it can not only enlarge a living space but also add value to a house.

A real estate agent roughly estimated that a 300-square-meter courtyard can sell for 45 million yuan. If a basement is dug out, it can add 10 million yuan to the property's total value. Construction costs are about 1.2 million yuan.

Digging a basement without official permission is dangerous because the construction may break gas pipes or water pipes buried underground, endangering public safety. Digging is difficult to detect unless neighbours report it to the police.

Authorities in Beijing strengthened their effort to crack down on illegal basements after the legislator's case.

A notice issued by authorities says that law enforcement officials can enter a house to investigate after receiving a tip-off and noticing suspicious activity. Previously, they didn't have the right to go inside.

When illegal underground construction is found, the property owner can be ordered to restore the site to its original state. If the owner refuses to comply within three days, related departments can enforce the order to fill in the basement and bill the owner.

In October, an illegal 318-square-meter basement in Qinglong Hutong, Dongcheng District, was filled in after it was reported by local residents and confirmed by local police.