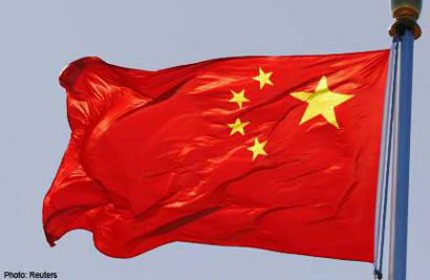 Zhang Xiaoming, head of the city's mainland China liaison office, was invited to the lunch by a pro-Beijing lawmaker following the July 1 protest in a bid to improve dialogue between the two sides.

Several members of the feisty pro-democracy camp walked out after voicing their protests to Zhang at the meeting in the city's Legislative Council - the first time a mainland official has attended a formal function at the assembly.

"Beijing's heavy-handed approach in Hong Kong and the suppression on democracy is totally wrong. It's about time to change," opposition lawmaker Chan Wai-yip told reporters after the meeting.

Beijing has promised to hold democratic elections for the city's chief executive by 2017, but critics have cast doubt on the timetable and say the former British colony's political future is in doubt.

The pro-reform lobby fears that even if elections are held by 2017 as promised, Beijing will try to weaken the influence of the democrats, who have dominated previous elections in the city of seven million.

Beijing has often refused to meet Hong Kong democrats in the past due to their criticism of the Tiananmen Square crackdown in 1989, with some of them banned from visiting the mainland.

One of the city's most outspoken lawmakers, Leung Kwok-hung, demanded the release of Nobel Peace Prize laureate and jailed political dissident Liu Xiaobo, while the city's first openly gay lawmaker Chan Chi-chuen presented Zhang with a book by a Chinese dissident.

"My demand is the release of Liu Xiaobo and that the Communist Party in China end one-party rule," Leung said before the lunch.

Zhang, however, said he hoped more meetings would follow.

"I think this lunch is only a beginning, I believe more dialogue will come," Zhang told reporters after the lunch.

On July 1, tens of thousands of protesters marched under torrential rain demanding democracy and denouncing Chief Executive Leung Chun-ying as a puppet of the mainland.

Under the electoral system in place since the city returned to Chinese rule in 1997, the leader is selected by a committee controlled by Beijing.

Democrats want the leader to be chosen by direct popular vote.

British Foreign Secretary William Hague added his voice to calls for electoral reform, as part of a regular review of developments in the former colony.

"I am in no doubt that the transition to universal suffrage will be in the best interests of Hong Kong's stability and prosperity," he said in a statement on Monday.

Ivan Choy, political science senior lecturer at the Chinese University of Hong Kong, said the meeting showed Beijing wanted to reach out to the pro-democracy camp.

"Beijing wants to begin some relations with democratic legislators. This is a friendly gesture before the consultation of the political reform because Beijing needs to face the reality," he told AFP.

"The public has high expectations on universal suffrage. If negotiations fail, the public will put all the blame on Beijing. They need to avoid that," he said.

"This is particularly true especially when relations between lawmakers and the government have been quite hostile for the past two years," he added.

Political analyst Sung Lap-kung said the meeting appeared to be a low-key gesture by Beijing to show it was willing to engage the pro-democracy camp.

"In China, usually officials would invite people to lunch or dinner to build relations. Doing it over a meal is more natural in a sense because it avoids too much formality," he said.