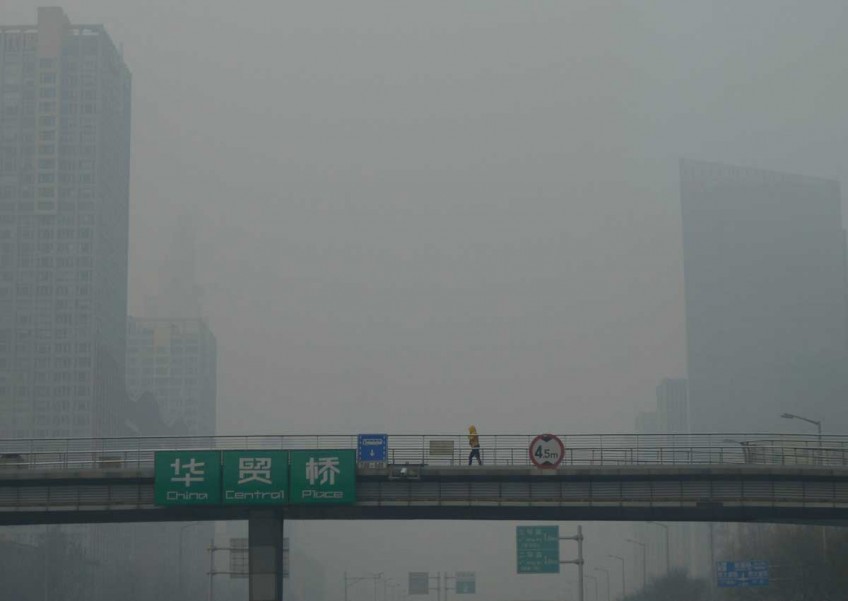 A woman walks on an overpass during the fourth day of a "red alert" for pollution in Beijing on December 22, 2015.
AFP

Capital targets 5 per cent reduction in average PM2.5 level in 2016

The city of Beijing will cut the level of PM2.5 in the air by 5 per cent this year, and will allocate more funds for projects to reduce emissions, an environmental official said.

To achieve the goal, the capital will inject 16.5 billion yuan (S$3.57 billion) into projects to reduce air pollution in 2016, up from 5.9 billion yuan in 2015, said Yu Jianhua, chief engineer of the Beijing Municipal Environmental Protection Bureau.

The money will subsidize projects including cutting coal consumption in rural areas, phasing out old vehicles with high emissions and shutting down 300 polluting companies, he said during a news conference at a session of the Beijing's People's Congress on Tuesday.

The average concentration of PM2.5 - particles smaller than 2.5 microns that can damage the lungs - reached 80.6 micrograms per cubic meter in Beijing last year, according to the bureau.

The State Council set targets in 2013 for the Beijing-Tianjin-Hebei region to improve air quality, saying the capital will cut the average PM2.5 reading to 60 micrograms per cubic meter by 2017.

Annual coal consumption in the capital has been cut from 23 million metric tons in 2012 to 12 million in 2015, which will be further lowered to 10 million by 2017, the bureau said. By then it should account for less than 10 per cent of the energy consumption mix.

The capital's cluster of neighbouring cities, which are frequently hit by severe smog, have also strengthened their funding of pollution control efforts, especially in reducing coal consumption.

Provinces like Hebei, Henan and Shandong plan to direct more funding to upgrade facilities and technologies, and shut down outdated companies.

Henan failed to reach national air quality standards on half of the days in 2015, and Zhengzhou, its capital, was listed in the top 10 cities with poor air quality in December.

Hebei, the province with the heaviest smog, has faced more financial pressure in lowering coal consumption to 40 million tons by 2017, which would require about 266 billion yuan, said Yin Guangping, deputy head of the provincial environmental protection bureau.

Of that, 63.6 billion yuan will come from the provincial government, which would add huge pressure to the province, he said.

Zhang Yu in Shijiazhuang and Qi Xin in Zhengzhou contributed to this story.