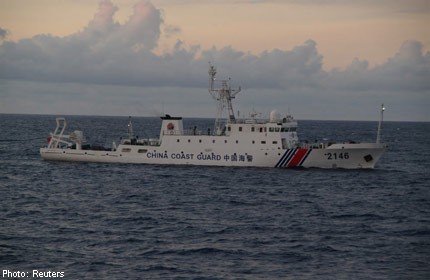 CHINA - Beijing rejected a protest from Tokyo on Thursday over Chinese ships patrolling near the Diaoyu Islands, as four Chinese vessels made their longest stay in the area since tensions flared over the islands in September.

Japan said three Chinese coast guard vessels entered the waters on Wednesday morning and another joined them in the evening.

One of the four vessels left the area on Wednesday evening, but was soon replaced by another ship, the Japanese coast guard said. The ships withdrew at about noon on Thursday.

This stay was "much longer" than one of 14 hours made by Chinese vessels on Feb 4 and "set a new record", according to Japan's Kyodo News Agency.

Japan's Chief Cabinet Secretary Yoshihide Suga said at a news conference on Thursday that Japan had summoned an envoy from the Chinese embassy early in the day to protest strongly and demand that the ships leave immediately.

However, the Chinese embassy in Japan said on its website that at the meeting acting Ambassador Han Zhiqiang protested strongly "about Japanese right-wingers entering Chinese territorial waters".

Han demanded that all Japanese ships should leave the waters immediately and that similar incidents should be prevented, the embassy said.

The Chinese ships turned back Japanese vessels during their stay.

A Japanese Foreign Ministry spokesman told Agence France-Presse, "The Chinese side argued its ... position and said it could not accept Japan's protest."

Huang Dahui, head of the Center for East Asia Studies at Beijing-based Renmin University of China, said, "The move can be seen as a response to Japan's recent muscle-flexing, including the unveiling of Japan's biggest warship since World War II."

Huang added, "Tokyo claimed it wanted to seek a summit with Beijing to ease the tensions, but on the other hand it has flexed its muscles and is lobbying other countries to jointly counter China."

Tokyo is considering a possible overhaul of the pacifist Constitution imposed on Japan after World War II, irritating Japan's neighbours, who suffered during the conflict.

Japanese Prime Minister Shinzo Abe has sent several advisers to Beijing in recent months, but rejected any conditions for talks, while China has denied that discussions on a possible summit are taking place.

Huang said: "As Japan continues to deny the existence of the territorial dispute over the Diaoyu Islands, it is impossible for the two countries to have a summit at the moment.

"And Beijing has to prove its right to the islands, as well as the existence of the territorial issue, in this way," he added, referring to the patrols by Chinese ships.

It is also possible that Beijing is expressing its dissatisfaction toward Tokyo's "double-faced approach", he said.

If the impasse continues, China will continue to strengthen its presence around the islands, Huang said.

"As there is no chance of talks, we have to speak with strength."

Both sides will show restraint if there is the prospect of talks, he said.

Huo Jiangang, a researcher on Japanese studies with the China Institutes of Contemporary International Relations, said the Chinese vessels' stay at the islands was not driven by any particular reason.

"It is Chinese territory, so there is nothing special about Chinese ships staying there," he said.