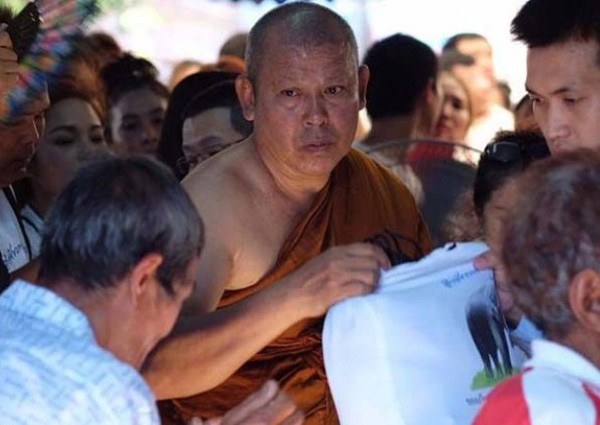 Luang Por Preecha, the abbot of a temple in Hua Hin, Prachuab Khiri Khan province, has decided to leave the monkhood.
The Nation/ANN

Luang Por Preecha, the abbot of a temple in Hua Hin, Prachuab Khiri Khan province, has decided to leave the monkhood.

The reasons he has cited for the decision are his passion for cockfighting and a failure to keep a promise to provincial senior monks, but the one reason that surprised everyone was the statement that a beauty pageant contestant had failed to return a charm, known as Saengsrithong,

Ikisuktoe Temple's Facebook page revealed the shocking message on March 10 in a statement reading: "Every follower of [Luang Por Preecha], please read this message from him ..."

The message said the abbot had been in monkhood for 33 years. He had decided to be ordained after his prayers for his mother, who had cancer, to live for more than six months defying doctors' predictions had been realised.

Without naming the beauty queen, the monk said: "I gave the charm to the woman taking part in the beauty pageant in the belief that it would help her in the contest and earn a good reputation for the country.

However, she did not honour her promise of returning it to me. I could not cope with it," said the monk.

Subsequent reports said that he had left the monkhood about a month before the temple's Facebook revealed the resignation.

Many believe the beauty queen he was referring to was Miss Thailand Universe 2016 Chalita Suansaen.

She finished in the top six in the Miss Universe contest in Philippines recently, the best performance by a Thai in the contest since Porntip Nakhirunkanok who became Miss Universe in 1988.

During the contest in Philippines, the temple's Facebook account campaigned for people to vote for her online and give her their support.

Thairath online, meanwhile, quoted Chalita's manager Khaopun Suriya as confirming that Chalita was one of the abbot's followers but saying he was unaware of the charm.

Another reason that purportedly explained his decision to quit the monkhood was because of his passion for cockfighting, for which he was heavily criticised.

He received his first group of fighting cocks from a late abbot of Chanasongkram Temple and gave the offspring to local residents who promised to breed them for fighting but instead killed them for food.

As a result, he took back the surviving chickens and used them for cockfighting.

"The many millions of baht raised from the cockfights were used to build the temple and 11 houses for poor people," he said, adding that he would not give up his love for cockfighting.

Another reason given for the abbot's departure was that some provincial monks had had problems with officials in the province.

The governor complied with the abbot's request to transfer the officials in order to end the feuds and legal issues, but he was ashamed that the monks had not kept their promise to end the conflicts after the transfer of the officials.