Despite the pandemic, the government is allowing people to travel as long as they comply with Covid-19 health protocols.

However, an expert has suggested that people who travel by airplane be extra careful about possible virus transmission in the cabin.

“Viruses can multiply quickly in an environment like an airplane cabin,” epidemiologist Tifauzia Tyassuma said, as quoted by tempo.co on Thursday.

She added that closed-off areas without ventilation and with little sunlight put occupants at high risk of transmission. Airplanes were one such infectious area.

“Airplanes are among the unhealthiest places [during the pandemic],” said Tifauzia, adding that travellers should stay alert to possible transmission.

All airlines in Indonesia have applied strict health protocols on their operations, including the mandatory use of masks throughout the trip and the requirement that travellers present nonreactive or negative Covid-19 test results.

The Transportation Ministry has also limited planes’ occupancy to 70 percent of their typical capacity to facilitate physical distancing.

National flag carrier Garuda Indonesia director Irfan Setiaputra said previously that the air circulation system in the airline’s planes was safer than those in home and office settings. Garuda, he said, used high-efficiency particulate air (HEPA) filters, devices made of extremely tightly knit fibers that capture and remove impurities from the air.

“The HEPA filters clean up the air circulation. Furthermore, the air within the cabins circulates vertically, so it doesn’t spread,” Irfan said on July 24.

With HEPA filters, Irfan said pathogens in the cabin could disappear, as air within the cabin would be discarded to outside. 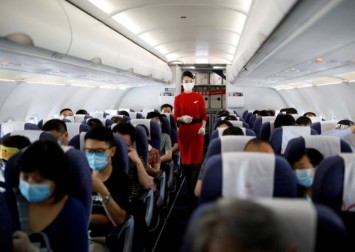 Along with making masks obligatory on flights, airlines are also taking other unprecedented precautions to reassure travellers that they can once again take to the skies.

The middle seat in a row of three has always been something of a nightmare for people flying alone. If you are unfortunate enough to have had the experience, you will no doubt remember being hemmed in on one side by a lucky passenger with a view of the sky and on the other by someone who could at least take advantage of extra space in the corridor to stretch his or her legs.

American Airlines has just received an Environmental Protection Agency (EPA) authorization to spray aircraft in its fleet with a new generation anti-microbial product that can effectively eliminate the coronavirus on surfaces for up to a week.

For its part, All Nippon Airways (ANA) is experimenting with a new device to make going to the bathroom on its flights an entirely hands-free experience.

The new innovation is currently being tested in Tokyo's Haneda airport, where travellers are being asked what they think of it. If the feedback is positive, it could soon be installed in all of ANA's planes.

The overall goal is to create a restroom door that can be opened and closed by passengers using their elbows. The prototype on show at the airport slides from left to right instead of folding open and shut on hinges, as airplane doors usually do.