Bleak Ramadan for Myanmar's Rohingya muslims, in danger of further abuses by the military, analysts warn

Rohingya refugees sift through rubble at the site where their shelter has been burned down following a fire that broke out at a Rohingya refugee camp in Cox's Bazar, Bangladesh, on March 23, 2021.

Rohingya Muslims in Myanmar are observing the start of the Ramadan fasting month this week while in danger of further abuses by the military, according to analysts and activists, while their counterparts living in refugee camps in neighbouring Bangladesh live in fear of fires and are facing an uncertain future.

Nasir Zakaria, executive director of the Chicago-based Rohingya Culture Center, warned that the community in Myanmar was “in great danger”. “They have no way to protect themselves. The military is too powerful. The Rohingya people can be arrested, killed, kidnapped, and raped,” he said.

Ronan Lee, a visiting scholar with the International State Crime Initiative – a community working to expose, document and resist state crime – said around 140,000 Rohingyas had been confined to concentration camps within the country’s western Rakhine state, where they have been forced to live since 2012.

“The circumstances for Rohingya living in Myanmar continue to be grim,” said Lee, who is also the author of Myanmar’s Rohingya Genocide: Identity, History and Hate Speech .

He said those outside the camps had to “endure an apartheid system” with tight restrictions on their ability to travel even to adjacent villages, and had limited access to education, health care and work opportunities.

“The genocidal conditions documented by the UN have barely changed in recent years and Rohingya villages are characterised by poverty, precarity, and fear of the military,” Lee said, referring to the 2019 United Nations report on the Rohingya situation which concluded that “there is a serious risk that genocidal actions may occur or recur”.

Described by the UN as Myanmar’s most persecuted ethnic group, the Rohingya people have faced discrimination and repression since the country’s independence in 1948.

While the country’s majority ethnically Bamar population have become more sympathetic to the plight of the Rohingya since the February 1 coup – with one of the leaders of a group of civilian rivals to the junta last month promising to delivery justice for the minority group – there appears to be little they can do to protect the Rohingya from the military.

Noting that the Rohingya’s situation had always been made worse when the junta acquired more power, Lee said the people were “very vulnerable to further abuses by the military”.

Recounting the atrocities faced by Rohingya civilians in 2017 – including murders, arrests, and sexual violence – he said they were unable to protect themselves from the well-armed soldiers.

“The situation is the same today,” Lee said, adding that internet blackouts and the widespread arrests of journalists had made it more difficult to bring the plight faced by the Rohingya people to light.

Nay San Lwin, co-founder of the Free Rohingya Coalition – a global network of Rohingya activists – expressed concerns that Myanmar military chief Min Aung Hlaing, who usurped power from the civilian government led by Aung San Suu Kyi , will launch another round of violence against the Rohingya people.

“[Min Aung Hlaing] once said that the Rohingya crisis is unfinished business from World War II,” he said.

During that conflict, Rohingya Muslims – who were allied with the British and were promised a Muslim state in return – fought against Rakhine Buddhists who had joined the side of the Japanese. After independence, the newly formed government of the predominantly Buddhist country denied citizenship to the Rohingyas, subjecting them to extensive, systematic discrimination in Myanmar. 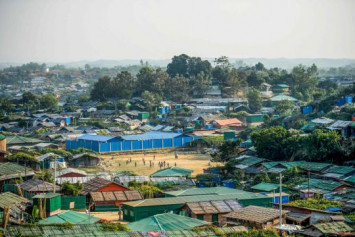 Nay San Lwin added that even though the Rohingya in Rakhine state wished to join the countrywide protests against the coup, there was little chance for them to do so as many were confined in camps and villages.

“The Rohingya have been unprotected and will be unprotected if there are any fights between the Arakan Army and the Myanmar military,” he said.

A major player among Myanmar’s more than two dozen ethnic armed groups, the Arakan Army had previously fought for greater autonomy in Rakhine state. Last month, however, it announced its readiness to join forces with all other ethnic groups in fighting against the junta if the brutal killing of anti-coup protesters continued.

Kyaw Win, founder and executive director of the London-based Burma Human Rights Network, said the military appeared to be so preoccupied with attacking protesters and ethnic armed groups that they “have not made significant efforts to target the Rohingya”.

However, he warned that this could change at any moment. “If any of the ethnic armed groups in Rakhine engaged in conflict with the army, it could easily turn into a situation where the military used it as an excuse to kill and massively displace the remaining Rohingya.”

The junta has in recent days conducted air strikes in Kachin state, near the Chinese border, in response to forces from the Karen National Liberation Army armed ethnic group overrunning a military outpost on March 27.

Meanwhile, Rohingya refugees in the Cox’s Bazar camps in Bangladesh are said to be fearing for their lives after seven more fires broke out since Sunday, taking the total number of blazes to 84 in just four months, according to ReliefWeb, a humanitarian information service provided by the United Nations Office for the Coordination of Humanitarian Affairs.

Describing the situation faced by the refugees as dire, Kyaw Win said the large fires in recent weeks had displaced thousands. “The majority of Rohingya feel trapped in the camps with no prospects for their future and no way to live a normal life,” he said.

Despite criticism from rights groups, the Bangladeshi government has since December moved more than 18,500 Rohingya from the overcrowded refugee camps of Cox’s Bazar to Bhasan Char island in the Bay of Bengal, which is said to be vulnerable to severe weather.

Nay San Lwin of The Free Rohingya Coalition said the refugees had little choice but to be taken to the remote island. “Bangladesh will take more refugees to this flood-prone island,” he said.

Despite concerns over the risks of tidal surges and cyclones on Bhasan Char, Dhaka has said conditions on the island – which is equipped with cyclone shelters; flood-protection embankments; facilities for education, farming and fishing; as well as hospitals and playgrounds – are much better than the camps in Cox’s Bazar. 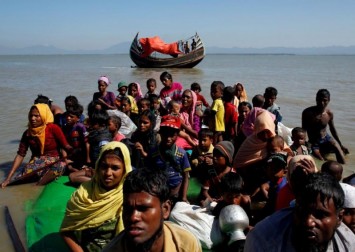 This, he said, was a counterproductive approach that cost lives when fires destroyed the flimsy accommodation available to the Rohingya residents, adding that the UN and Bangladesh had to cooperate to recognise the Rohingya as victims of crimes and give the refugees the assistance they needed to build dignified lives.

“Important steps must involve the UN and Bangladesh prioritising Rohingya voices in decision-making about the refugee community,” he said.

Even though international pressure is mounting on the Myanmar military to restore democracy and repatriate the refugees, Lee said the coup had made their repatriation even less likely.

“The Rohingya’s long-term future will be brighter [only] if the coup can be defeated,” Lee said.