Blood supplies across the country are dwindling as a result of fewer people participating in blood drives during the fasting month of Ramadan and the Covid-19 outbreak.

During Ramadan, when Muslims refrain from eating and drinking from dawn to dusk, a decline in blood supplies is common -- mainly because fasting saps people's energy and because of a common conception that donating blood nullifies fasting.

But the outbreak of the coronavirus, which has infected 15,438 people across the country and killed 1,028 patients, and physical distancing have further discouraged people from giving blood.

This Ramadan, which coincides with the outbreak, the PMI saw a decline in blood donors by 60 per cent in each region so far, with only about 400 bags collected per day, a significant drop from the 1,000 bags on normal days.

"Ever since the first Covid-19 cases were reported in March, followed by social distancing policies, many people, institutions and communities have cancelled appointments for blood donation due to fears of contracting the virus from crowds during blood drives," PMI's blood transfusion unit head Linda Lukita Waseso said on Tuesday.

Many hospitals suspend elective surgeries - or scheduled and nonemergency procedures which also often require blood transfusions - due to the outbreak, but demand for blood remains high, particularly for people with thalassemia and haemophilia, who require regular transfusions, as well as mothers bleeding while giving birth.

The PMI declined to detail the proportions of blood used for regular and perioperative transfusions.

The Health Ministry's director for vector-borne and zoonotic diseases, Siti Nadia Tarmizi, acknowledged that dengue fever cases kept rising. The ministry has recorded more 50,000 dengue cases so far this year, and 322 deaths, as of Friday.

The Meteorology, Climatology and Geophysics Agency (BMKG) issued warnings of extreme weather in several parts of Indonesia as the rainy season, initially predicted to end in April, is stretching to June.

As a consequence, dengue fever cases would likely remain common until next month, Siti said. The country recorded around 20 cases a day in May last year, but this year, the daily average in May has been around 50 cases so far.

Short supplies of blood have been reported across the country, including in Jakarta, with a decline of 80 per cent, or only 200 bags collected per day compared to 1,000 bags per day in regular months.

The suspension of elective surgeries in many hospitals in the capital helped reduce blood demand to 600 bags per day, but that is still three times the supply, according to PMI Jakarta's blood transfusion unit deputy head Niken Ritchie.

To ensure sufficient blood supplies nationwide, the PMI has intensified blood drives in many neighbourhoods at night after Muslims break their fast and continuously promoted blood donation on social media and television.

It has also teamed up with the Indonesian Military (TNI), the police and government institutions to encourage blood donations among civil servants, military and police officers.

PMI chairman and the country's former vice president, Jusuf Kalla, has appealed to healthy people to donate blood during the pandemic.

The PMI is implementing protocols to ensure social distancing at its facilities and uses sterile tools. 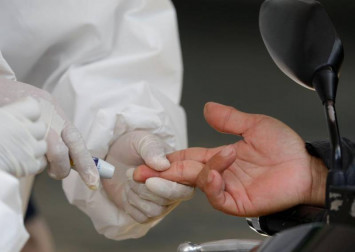 Donors are now required to provide additional medical information, such as whether they are persons under monitoring (ODPs) for Covid-19, patients under surveillance (PDPs) or have a travel history involving affected countries.

Linda was aware that some potential donors were afraid of either catching or spreading the coronavirus through blood donations, despite there being no evidence that the virus can be transmitted by blood transfusion.

"Also, no such cases have been reported [of the virus being transmitted by blood transfusion]," she said.

Private sector employee Indra Bagoes, 30, from Cilegon, Banten, a regular blood donor for more than eight years, said he did not hesitate to donate blood at PMI Cilegon last week despite advice from his company to avoid places with a high risk of Covid-19 transmissions, such as health facilities.

"I intentionally donated [blood] because of the blood shortage," he said.

As a frequent donor, Indra said he believed the PMI had implemented health standards to prevent Covid-19 transmission, for the safety of both donors and recipients.