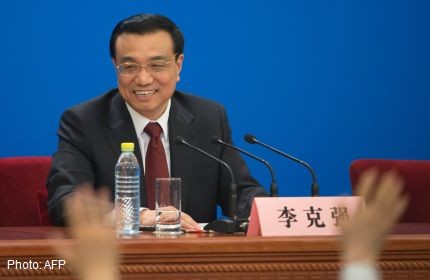 Premier of the People's Republic of China, Li Keqiang.

CHINA - Premier Li Keqiang on Wednesday mapped out the blueprint for what he called a "diamond decade" of relations between China and ASEAN by upgrading political and economic ties.

Li proposed to discuss the possibility of signing a treaty on good-neighbourliness, friendship and cooperation between China and the Association of Southeast Asian Nations.

Li made the remarks at the China-ASEAN leaders meeting on Wednesday after he arrived in Bandar Seri Begawan, Brunei's capital.

ASEAN leaders spoke highly of the proposal, according to a joint declaration released after the summit.

China and ASEAN established a strategic partnership 10 years ago.

Ruan Zongze, vice president of the China Institute of International Studies, said the treaty, if signed, will put the China-ASEAN relationship into a legal framework that includes a solemn commitment from Beijing for peaceful co-existence.

"The treaty will also dispel concerns and misunderstandings by Southeast Asian neighbours about China," Ruan said.

Compared with the economy and trade, "a greater priority" has been placed on cooperation in the political field at the Wednesday summit, said Wu Shicun, head of the National Institute of South China Sea Studies.

China and ASEAN expect to establish a hotline to respond to maritime emergencies, the joint declaration said.

Ji Ling, deputy director of the East Asia Studies Centre of the China Foreign Affairs University, said China and Southeast Asian nations should make sure their ties are not affected by the South China Sea issue.

Those fields include energy and resources, maritime routes, ocean management and regional security, and "these dimensions have a direct connection to the economic growth of the region and all its members", Ji said.

The premier's trip, the first to this region after he assumed office in March, follows President Xi Jinping's tour to Southeast Asia that ended on Tuesday.

In recent years, tensions have risen as some countries repeatedly claimed some islands in the South China Sea. For example, the Philippines has attempted to internationalise its claim on China's Huangyan Island.

Sea disputes should be addressed through consultation and negotiation between parties directly concerned, Li said.

"Generally speaking, China and ASEAN have kept the complicated disputes under control despite some small frictions," Qu said.

Qu underscored the importance of fully implementing the Declaration of Conduct in the South China Sea, a document signed in 2002.

"If the declaration is not followed in the next 10 years, many plans for cooperation may end up in vain," Qu said.

Prior to his visit, Li said in a written interview to media from ASEAN countries that "as a big trading nation, China depends heavily on the unimpeded access and safety of international sea lanes" in the South China Sea.

"The truth is, the territorial disputes in the South China Sea have not affected the international shipping lane," he said.

Li will attend a summit with ASEAN, China, Japan and South Korea on Thursday.