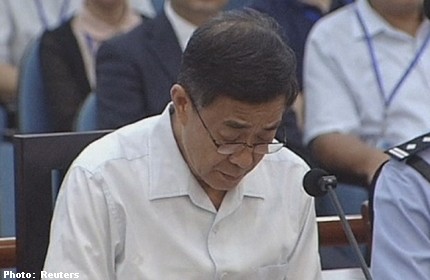 Ousted Chinese politician Bo Xilai sits in court on the third day of his trial in Jinan, Shandong Province, in this still image taken from video shot on August 24, 2013.

Bo denies embezzling the money, intended for a local government construction project, but said: "I feel I should take some responsibility" for the money ending up in his wife Gu Kailai's bank account and for failing to investigate.

"I feel ashamed. I was too careless, because these are state funds," he said according to transcripts that the Intermediate People's Court in Jinan, in eastern China, is providing on its account on Sina Weibo, China's equivalent of Twitter.

The courtroom scenes come after a lurid scandal triggered by the death of a British businessman - for which Bo's wife Gu was convicted of murder - that rocked the ruling Communist Party.

Until the admission Bo's performance had been defiant, denying charges of bribe-taking and embezzlement totalling 26.8 million yuan ($4.4 million).

He also faces accusations of abuse of power in connection with the investigation into Heywood's death, and Wang Lijun, his police chief and right-hand man in Chongqing, the megacity he headed, appeared in court to testify against him, the official Xinhua news agency said.

Earlier, Bo launched a scathing attack on a key witness, saying even the most stupid official knew not to discuss bribery where they could be overheard.

Wang Zhenggang, a former planning official in Dalian, where Bo was the mayor in the 1990s, told the court the politician had telephoned Gu in front of him in connection with the five million yuan.

The claim did not make sense, he said. "It is not even what the most stupid corruption offender would do. Corrupt offenders with even the lowest IQ would ask who else in Dalian was aware of the money."

He added: "All those who know me know that I ask them to switch off their mobile phones before I speak. I am quite cautious."

The court is posting regular but delayed transcripts of the hearings, and no live audio or video is available, nor are any foreign media or independent observers present in the room.

The scandal erupted in advance of a generational shift of power atop the factionalised Communist Party, and Bo's feisty performance during his trial has astonished a public unfamiliar with the open airing of top-level intrigue.

The hearings are in stark contrast to previous Chinese political trials in which most defendants have humbly confessed their crimes amid opaque court proceedings.

Revelations of private jet flights, luxury villas and rare animal meats have held Chinese Internet users spellbound, while Bo has showed open disdain for prosecution witnesses, including Gu, whom he derided as "insane".

He confessed to having had extramarital affairs and said Gu moved to Britain because she was angry with him, the court transcripts showed.

She could yet face trial for economic crimes and be executed, he said according to the transcripts, but "could be released rather soon if she reports others' offences to authorities".

The trial was widely expected to be only two days long and moved into an unexpected third day Saturday, but analysts still believe a guilty verdict and long prison sentence for Bo were agreed beforehand.

Nothing has been said publicly of Bo's links with other top Communist leaders - even though he was once head of the southwestern megacity of Chongqing and tipped to join the highest echelons of Chinese political power.

State-run media heaped praise on the proceedings, calling them a landmark in the history of Chinese jurisprudence.

"The live show has addressed various doubts and rumours in and outside China, the paper said. "It demonstrated that the authorities are ready to receive more public scrutiny."

But most Chinese-language newspapers have only carried the reports by the official Xinhua news agency, which often include only a passing mention of Bo's defence.