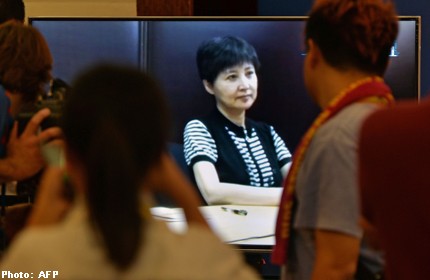 Journalists look at a broadcast of Gu Kailai (C), who is the wife of disgraced politician Bo Xilai, as she gives a recorded testimony during his trial at the Intermediate People's Court in Jinan, Shandong Province on August 23, 2013.

JINAN - Fallen Chinese politician Bo Xilai described his wife as "insane" Friday after his corruption trial heard video testimony from her implicating him in bribery, in a case that is gripping the communist-run country.

Gu Kailai, once a high-flying lawyer but convicted last year of murdering Neil Heywood, the British businessman whose death sparked the corruption scandal that brought Bo down, looked nervous in the pre-recorded video.

She described telling her husband of a series of bribes, but Bo told the court she was mentally unstable and had compared herself to a historical Chinese assassin, telling him she felt "heroic" when killing Heywood.

The scandal erupted in advance of a generational shift of power atop China's Communist Party and Bo's feisty performance over the two days of his trial has astonished a public unfamiliar with the open airing of top-level intrigue.

In her testimony Gu said she feared Heywood would kidnap and kill the couple's son Bo Guagua in the United States.

She looked thin and pale during the questioning, recorded earlier this month. It was played in court the day after Bo pleaded ignorance to her dealings, and released by the court on Chinese social media, where it had more than one million views in an hour.

Asked if Bo knew about airline tickets and other items provided by business tycoon Xu Ming - who prosecutors said had bribed him to the tune of 20.7 million yuan ($3.4 million) - Gu at first said "he should have been aware".

Pressed by the questioner, she said: "I told him."

According to transcripts of Friday's hearing released by the court in Jinan in eastern China on Sina Weibo, a Chinese equivalent of Twitter, Bo told the court: "She is insane now and she often tells lies.

"The investigators placed enormous pressure on her to expose me when she was mentally disordered."

She had compared herself to Jing Ke, who more than 2,000 years ago tried and failed to kill the man who would become the first emperor of a unified China, he added.

The claim was "sufficient to prove that she was mentally disordered", Bo said.

State-run media have proclaimed the proceedings a mark of transparency.

Bo, once one of China's highest-flying politicians, faces charges of bribery, embezzlement and abuse of power which emerged after the lurid scandal triggered by Heywood's death.

Bo presented an unexpectedly spirited defence against bribery charges as the trial began on Thursday, comparing one witness, businessman Tang Xiaolin, to a "mad dog" who appeared to have "sold his soul".

State broadcaster CCTV on Friday released video of one of the trial's most dramatic moments, when Bo cross-examined Xu Ming.

In a colourful exchange - which touched on a football club, a hot air balloon and the purchase of a French villa - Bo argued that the tycoon had not made him aware of the transactions.

Bo's populist politics won supporters across China but alienated top party leaders who saw his brash approach as a return to a bygone era of strongman rule.

Backroom political discussions ahead of the trial have ensured that a guilty verdict from the court is almost certain, with a lengthy prison sentence likely to follow, analysts say.

At least five relatives attended the hearing, including Li Wangzhi, Bo's son from his first marriage. Li released a statement to The New York Times praising his father's courage in speaking out, while thanking the authorities for allowing him to do so.

"I thank the party central authorities and the court for giving the defendant greater rights to a defence and freedom than he had expected, allowing my father to speak his true mind," he said, adding he was "proud" of his father.

Bo Xilai's own father, revolutionary military leader Bo Yibo, also gained a reputation for defying the authorities, refusing to admit any wrongdoing while he was jailed and abused during the Cultural Revolution.

Police - uniformed and plain-clothed - blocked off roads around the court again on Friday morning, with the only journalists able to gain entry to the proceedings from state-run media.

A convoy thought to be carrying Bo, which included a silver Mercedes prison van, pulled into the main entrance shortly before the trial restarted in the morning.