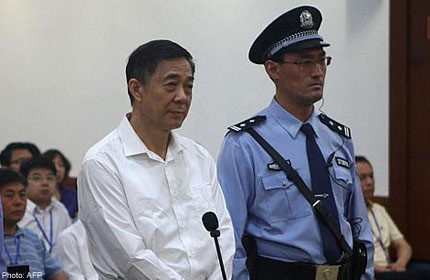 JINAN- He may have been stripped of all his titles, but former Chongqing party boss Bo Xilai showed he had lost none of his famed flamboyance when he put up a feisty performance at the start of China's most politically sensitive trial in decades.

Dressed in a white shirt and dark trousers instead of the impeccably tailored suits of the past, the 64-year-old "princeling" did not plead guilty to the charges, as had been expected.

Instead, Bo (left in photo) denied taking bribes and launched into cutting rebuttals of the prosecution's case. He even dismissed several key witnesses as "a mad dog", "ridiculous" and "ugly".

The one-time political star, who had not been seen in public since last March, is being tried in a Jinan court on charges of abuse of power, and of embezzling and accepting bribes totalling nearly 27 million yuan (S$5.6 million).

Bo claimed that he did not know of the sums or gifts, such as a mansion in France or an Africa holiday that Xu had given his wife Gu Kailai or son Guagua.

He also described as "laughable" written testimony from Gu, who is serving a suspended death sentence for murder.

When Xu took the stand, Bo asked: "You say Gu Kailai and Bo Guagua needed a few million a year overseas. Have you ever told me?" Xu replied no.

This was based on transcripts posted on the Jinan court's Weibo account, the first time online updates were given for a key trial.

Netizens lapped up the posts and pored over everything, from Bo's white shirt to how the guards must have been chosen to tower over the already-tall Bo.

The greater openness, albeit limited, underscores how gingerly Beijing is handling Bo's case, a scandal that threatens to expose the political infighting and corruption in the Communist Party.

Bo's defiance stems from his feisty personality and status as a political blue blood, lawyer Hao Jinsong told The Straits Times. "He feels he does not have to act in the authorities' show."

What intrigued observers is how Bo Guagua has been named in the case against his father. Xu had bribed Bo through his wife and son, the court heard.

Some observers, like Wuhan University law expert Qin Qianhong, believe that Bo's denials and the naming of Guagua are part of an act to prove this is no show trial.

A court official said 110 people attended the trial, including 19 reporters and five of Bo's relatives.

The two-day hearing, which began at 8.43am and ended at 6.18pm, continues this morning. A verdict is expected early next month, CCTV reported.