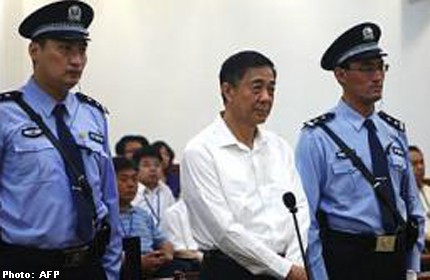 JINAN - In the first picture of Bo Xilai for almost 18 months the fallen politician stands in stark contrast to the man who wore well-cut suits and confident demeanour before the murder, corruption and abuse of power scandal broke.

Standing in the dock at the beginning of his trial, the once rising star of China's Communist party stood in an open-necked shirt looking pensive, slightly stooped and his hair trimmed and tinged with grey at the temples.

While the 64-year-old also appeared to have lost some weight, his none-too-slight frame - he stands around six foot tall - was noticeably shorter than the two policemen flanking him.

Bo's trial in Jinan on Thursday was the first time he had been publicly shown since China's National People's Congress parliament meeting in early 2012.

He was detained soon after and held at an unknown location, with the information vacuum surrounding him filled with wild rumours of hunger strikes and a refusal to cut his hair.

The moment the image was posted on the court's account on Sina Weibo, a Chinese microblogging service similar to Twitter, journalists at a media centre in a nearby hotel crowded round to take photos and video of it.