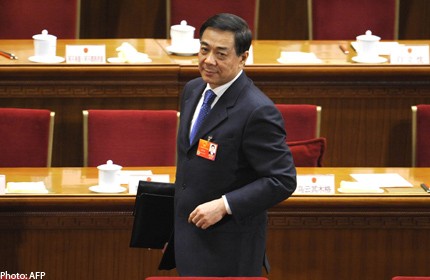 Bo, once one of China's most powerful political leaders, is accused of bribery, graft and abuse of power, Xinhua news agency said, citing the court in Jinan in eastern China.

The downfall of Bo - who ran the western megacity of Chongqing - marked China's biggest political scandal in decades.

His glittering career came crashing down last year amid allegations that his wife - later convicted of murder - was involved in the death of a British businessman and that he had sought to block the police investigation.

Bo was indicted last month on the charges.

The scandal emerged ahead of a once-a-decade leadership transition in which Bo had been considered a candidate for the Politburo Standing Committee - China's most powerful body.

The respected current affairs magazine Caijing last month said the 25-million-yuan (S$5.19 million) corruption charges against Bo stem from his time running the smaller city of Dalian in the 1990s, not Chongqing. It did not cite a source.

Analysts say that given the length of his career and the high positions he reached it seemed implausible corruption would only affect Bo's earlier and less-powerful posts.

They say determining how to handle Bo's trial would have required tough negotiations among the political elite, which can effectively dictate judicial proceedings.

From Dalian - a city of seven million people - Bo went on to run the national ministry of commerce and then Chongqing metropolis with a population of 30 million.

Fearing retribution from his boss, Wang fled to a US consulate in the city of Chengdu in February 2012, disclosing the tangled events that eventually led to Bo's downfall.

Bo was detained a month later and Gu was eventually handed a suspended death sentence for murder.

President Xi Jinping has pledged a crackdown on rampant official corruption, but analysts doubt how effective it can be without upending powerful vested interests.