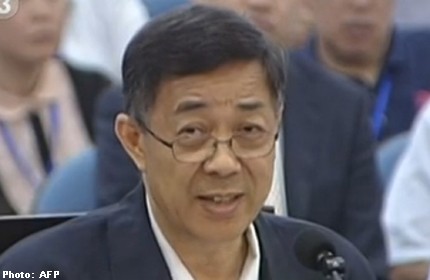 JINAN - Deliveries rarely get more special than a carton of quality stationery that Chinese prosecutors say was left for Bo Xilai: Hidden among the expensive envelopes and paper were eight bundles of US$100 notes amounting to US$80,000 (S$101,400).

A businessman came bearing that gift on a visit to the then Commerce Minister's office in 2005, placing it innocuously beside Bo's work desk.

"The house in Shenzhen is built... There is US$80,000 here for you," the businessman, Tang Xiaolin, said in his testimony to Chinese prosecutors.

The cash was for Bo's help in a Shenzhen real estate deal that made at least 16 million yuan (S$3.3 million) in profits for Tang's firm. Bo had eased the deal by signing an appeal letter to the southern city's Mayor Yu Youjun.

Bo did not say a word when Tang left the gift for him, Tang said, merely nodding and accepting it.

The episode, one of many unveiled during the ongoing trial of Bo for corruption and abuse of power, has opened a rare window into the world of top-level graft in China.

Transcripts of testimony by key witnesses in the trial further revealed how businessmen who tried to ingratiate themselves with powerful officials like Bo would even help to run errands.

Some, for instance, assisted the leaders and their families in booking air tickets. Others took the initiative to scout for good property deals overseas.

A few businessmen even took on the role of a "caring uncle" who would lavish gifts on the leaders' children and take care of their expensive education abroad.

In return, politicians open doors for the businessmen - either by granting government approvals for projects, hooking them up with visiting foreign leaders, or simply providing them with an appeal letter bearing their signatures.

While such practices have always been the subject of gossip in China, they were not disclosed publicly and in such great detail until the court trying Bo's case in Jinan revealed the specifics of these shady deals.

The court documents also exposed another method of winning political favours in China - by getting in the good books of the top leaders' family members.

Xu, 42, met Gu around 1993 and left a good impression that lasts to this day. In a video shown in court last Friday, Gu praised Xu as someone who was "lao kao" - dead reliable.

Xu profited from his close ties with Bo. For example, when the businessman wanted to curry favour with the King of Saudi Arabia to get a leg up for an oil deal, he roped in Bo to help host the visitor.

By 2005, Xu had been named China's eighth richest man by Forbes magazine.

Xu, in turn, covered the expenses of Gu and Guagua, paying for their overseas air tickets when Guagua went to Britain to study after primary school in China.

"For example, when buying air tickets, people in the family would look for Xu Ming directly," Gu said in the video.

The Bos were just doing what many of China's rich and powerful do: sending their children for overseas studies and separating them from the hoi polloi.

Guagua had attended the elite Harrow College in Britain before going on to Oxford University and then Harvard in the United States. He is now a law student at Columbia University in New York.

Xu also pandered to Guagua's whims and fancies, paying for a 80,000 yuan Segway electric vehicle and settling a 300,000 yuan credit card bill for the then teen.

Guagua even went to Germany to watch the 2006 World Cup, thanks to the largesse of "Uncle Xu", who also sponsored the teen's trips to Cuba, Argentina, Venice and Paris.

And when Bo Junior and friends wanted to go on holiday to Africa in 2011, it was again Xu who helped them do so in style, on a chartered plane for six from Dubai to Mount Kilimanjaro.

Guagua could also afford to be generous to friends from Harvard Kennedy School, thanks to Xu, who reportedly paid for the five-star hotel stays for the delegation of 40 when they visited Beijing.

Overseas properties also came with overseas study for the offspring of officials.

In 2000, Gu showed Xu some pictures of property in France, hinting that she was interested in acquiring property. He went on to buy a 2.2 million euro (S$3.7 million) luxury villa in Cannes, France, for her.

She wanted to have a secure source of income - the villa was said to generate some eight to nine million yuan a year in rent - so that son Guagua wouldn't have to tyre himself out making a living in future, she said in her testimony.

She made sure the house could not be traced to her or Bo with a complex holding structure that involved paper companies and middlemen like Briton Neil Heywood, an arrangement which triggered the murder that led to Bo's downfall.

The tycoons who wheel and deal also know to hedge their bets and spread the risk.

Certainly, there is talk that other officials may be implicated in the Bo case.

But the signs are that Beijing wants to limit the damage to the party and not investigate others linked to Xu, said Tsinghua University's anti-graft expert Ren Jianming.

Professor Ren further noted that Bo has not named other officials who may be involved, despite putting up a feisty defence of his innocence in recent days.

Bo told the court on Saturday that his wife did not need to fret about money as she had five law firms that made a lot of money.

He also insisted that his son Guagua was a good student who got scholarships.

He said: "What reason do I have to worry that they would have (financial) difficulties?"