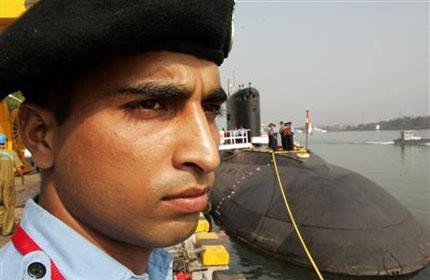 An Indian Navy security officer stands guard near a Sindhurakshak submarine ahead of Indian President Abdul Kalam's visit in Visakhapatnam in this February 13, 2006 file photo.

MUMBAI - India's navy on Friday retrieved four charred bodies from a submarine that exploded in a Mumbai dockyard, and said it was unlikely any of the other 15 missing crewmen would be found alive.

The diesel-powered INS Sindhurakshak sank in a military dockyard early Wednesday, dealing a setback to India's naval ambitions just days after it unveiled its first domestically made aircraft carrier.

Navy divers managed to enter the vessel, whose forward section was totally destroyed in the fire, but their progress was hampered by extreme heat, poor visibility and mangled hatches.

The first bodies were retrieved from the most easily accessible compartments on Friday and have been sent for DNA testing because severe burns prevented their identification, a navy statement said.

It also suggested some personnel might never be found because of the fierce temperatures generated in the fire during which some of the weapons on board - cruise missiles and torpedoes - ignited.

Water inside the craft was still too hot for divers to enter 12 hours after the accident on Wednesday, and visibility inside was nil "even with high power underwater lamps".

"The navy will continue to search every inch of the submerged submarine till all bodies are either located or it can be stated with finality that no bodies remain to be found," the statement said.

The navy's focus remains on accessing all compartments of the submarine before attempting to bring the vessel to the surface, possibly with the help of a private salvage company.

An inquiry has been set up to determine what caused the blasts, which turned the recently refurbished Russian-built submarine into a fireball.

The Times of India newspaper speculated Friday that sabotage might have been the cause of the explosion, but the navy chief said Wednesday that "the indicators at this point of time do not support that theory".

The families of the 18 men on board at the time of the explosion, whose names have been released, have gathered in Mumbai.

The 16-year-old submarine, whose name means "Protector of the Seas" in Hindi, returned from Russia in April where it underwent a two-year overhaul of its communication, weapons and propulsion systems.

It is still covered by a Russian warranty and the Russian company responsible for the refit, Zvyozdochka, has offered its assistance.

"The accident is all the more painful because the navy had recently achieved two major successes in the form of its first nuclear submarine, INS Arihant, and the aircraft carrier, INS Vikrant," Singh said.

In addition to the aircraft carrier launched Monday, India announced sea trials for its first domestically made nuclear submarine last weekend, which Singh trumpeted as a "giant stride" for the country.