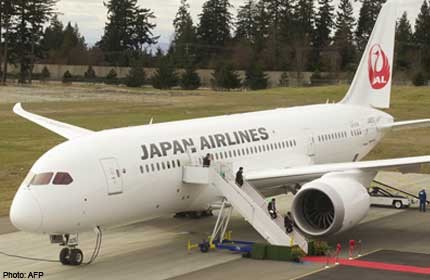 Two new government planes will likely be introduced in fiscal 2019 after the current two Boeing 747-400s are retired in fiscal 2018, officials said Thursday.

A related budget of several tens of billions of yen will be incorporated in a governmental budget request for fiscal 2014 to be submitted in late August, according to the officials. The fuel-efficient Boeing 777, which has almost the same seat capacity as the Boeing 747, is considered the leading candidate for the replacement model.

First introduced in 1991, government planes are operated by the Air Self-Defence Force. Their maintenance and the training of crew members have been commissioned to Japan Airlines. Normally used for overseas travel by the Emperor or prime minister, one of the planes was used to transport rescued Japanese citizens and victims back to Japan during a hostage crisis in Algeria in January.

The proposal for new government planes entered discussions when JAL retired its fuel-inefficient Boeing 747s in fiscal 2010. But a decision was postponed due to opposition from the Finance Ministry and other government bodies. Critics of the proposal remarked, "We can't discuss new equipment purchases when the public is being forced to shoulder a greater burden with the upcoming consumption tax hike."

The government will decide how to select the next aircraft model.

One major advantage of the Boeing 777 is its low operational cost, as the model's twin engines are more fuel-efficient than those of the 747, which has four engines. The Boeing 747-400 passenger model offers about 410 seats, while the Boeing 777-300, which has been widely adopted by domestic and foreign airlines as the 747's successor, has about 380 seats.

Government planes are currently deployed in the ASDF's Chitose Air Base in Chitose, Hokkaido. They are sometimes used more than 20 times a year.

Each government plane has a conference room and office equipment, including a fax, so that top government officials can work during flights. Each also has a briefing room for press conferences. In case of mechanical problems or other issues, two government planes usually fly in tandem to a destination.

The operation of government planes by the ASDF is based on Article 100-5 of the Self-Defence Forces Law, which stipulates that the ASDF can transport by plane state guests, the prime minister and others defined by government ordinances.

Article 84-3 also says a plane can be used to transport Japanese citizens whose lives are in need of protection, as well as the bodies of citizens in the event of disaster, turmoil and other emergency situations overseas.

This provision was applied for the transportation of Japanese citizens by a government plane during the hostage crisis in Algeria.

The 777, which went into service in 1995, is a large aircraft manufactured by US manufacturer Boeing following the 747, a jumbo jet nicknamed the "Queen of the Skies." The company said it received 200 orders for the Boeing 777 in 2011. The 777 consumes just two-thirds of the fuel required by a 747.