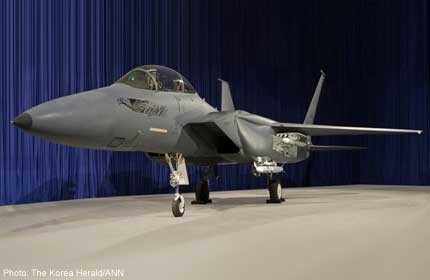 The EADS was virtually excluded from the contest to sell 60 combat aircraft to Seoul as it offered the price estimate after "arbitrarily" altering mutually-agreed conditions, according to sources.

The Defence Acquisition Program Administration has demanded that among the 60 aircraft, 15 jets should be the double-seat version of the Eurofighter Tranche 3 Typhoon, EADS offered to give only six double-seat jets so as not to exceed the budget.

"The price bidding is to proceed based on mutually agreed conditions. The DAPA can't accept any arbitrary changes to the conditions. (EADS), thus, exceeded the budget (according to the mutual agreement)," a DAPA official said on condition of anonymity.

"As we have one candidate that meets the budget requirement, the procurement process will proceed as planned."

Boeing's F-15 Silent Eagle has now become the only candidate that meets Seoul's procurement budget. Lockheed Martin's F-35, once seen as the most likely candidate, failed to join the final race last week as its price offer far exceeded the budget.

From Aug. 13 through Aug. 16, the DAPA conducted 13 bidding sessions. At the final session, EADS changed the mutual conditions and marked down the price to join the final race, the DAPA said.

The bidding came after the DAPA conducted 55 bidding sessions for three weeks from June 18 and failed to have any candidate meet the budget.

The F-15 SE will be proposed as a qualified candidate to the government's defence acquisition committee slated to be held in the middle of next month.

But it still remains to be seen whether Boeing's F-15SE can be the winner as the committee will make its own decision based on its consideration of other various factors.

The committee could agree to select the qualified candidate or overturn the DAPA's proposal and demand a review of the candidate evaluations, officials said.

Developed based on what Boeing calls "combat-proven" F-15 Eagle, the two-seat, two-engine F-15 Silent Eagle boasts long-range, large payload capabilities with some added radar-evading features. It still remains at a conceptual stage and has yet to be made as a product.

Through its procurement projects in 2002 and 2005, the Korean Air Force purchased 60 F-15Ks. Critics said as the F-15 platform was developed more than four decades ago, it is not in line with Seoul's plan to secure "next-generation" combat aircraft.