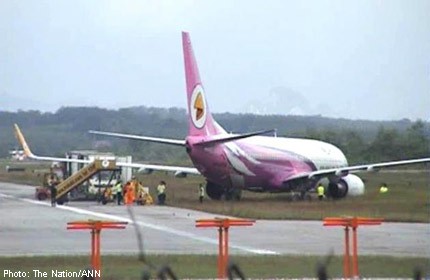 THAILAND - Heavy rain hampered officials' efforts to remove the Boeing 737-800, which slid off a runway and became stuck in mud. Workers used three tow-trucks to try to pull the plane free, but only succeeded in sinking the aircraft's front wheel deeper into the mud.

Hence they had to remove all the jet fuel to lighten the aircraft and place a metal sheet under the wheel so it could be pulled out.

All Nok Air flights servicing the airport have been diverted to Nakhon Si Thammarat Airport, while AirAsia flights have shifted to Krabi Airport. Vans were on hand at Trang Airport to give passengers a free lift to the above-mentioned airports.

Trang Chamber of Commerce president Salil Totabtiang said travellers and tourists were affected by the incident, especially those planning for the holiday weekend of August 10-12. He said the airport was trying to solve the problem so that flights could resume in the evening.

Seafood operators were also affected but had shifted to using other nearby airports to send their products to customers, although that meant higher transport costs, longer transport times and possible adverse effects on product freshness.

Saying he planned to hold discussions with affected business operators, Salil urged relevant agencies and all involved parties to find measures to prevent a recurrence of the incident, pointing out that commercial aviation traffic would only increase in future.

Bangkok-bound flight DD7411 slid off the runway while preparing for takeoff in heavy rain on Tuesday evening.

The 142 people on board escaped with no injuries.