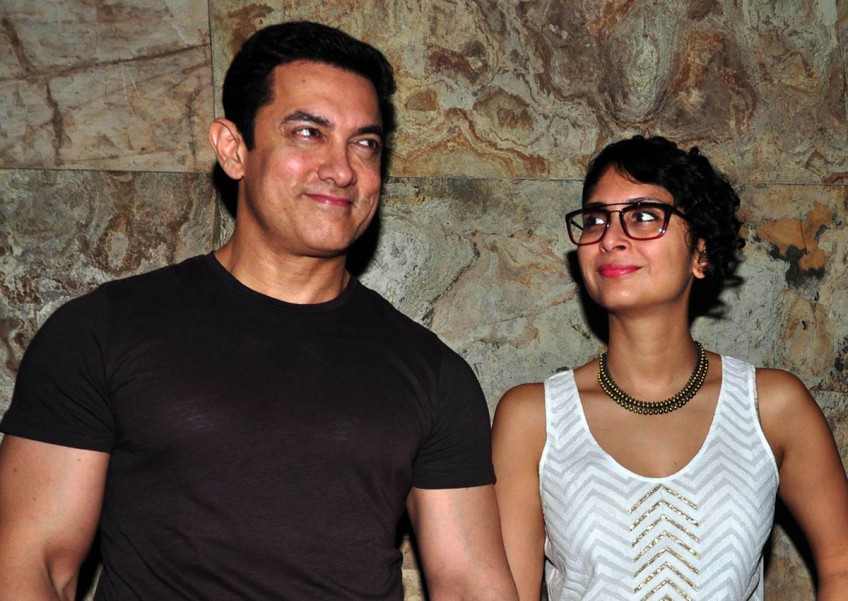 Bollywood actor Aamir Khan, who is Muslim, and his Hindu wife Kiran Rao. Hindu groups have been protesting outside their home.
AFP

Indian superstar Aamir Khan, who voiced discomfort over recent instances of religious intolerance in the country, has triggered a political storm ahead of a crucial Parliament session, where the government is hoping to push through key reforms.

Khan - the face of the government's Incredible India tourism campaign - told the audience at an event on Monday hosted by the Indian Express newspaper that his wife Kiran Rao had suggested moving from the country as she "fears for her child".

"For the first time, she said, 'Should we move out of India? That's a disastrous and big statement for Kiran to make to me. She fears for her child. She fears about what the atmosphere around us will be," said Khan, a Muslim whose wife is Hindu. "That does indicate that there is a sense of growing disquiet."

Following a severe backlash that included Hindu groups protesting outside his house and the ruling party Bharatiya Janata Party (BJP) calling his statement "alarmist", Khan yesterday said he and his wife had no intention of leaving India.

"We never did, and nor would we like to in the future... India is my country, I love it. To all the people shouting obscenities at me for speaking my heart out, it saddens me to say you are only proving my point," he said in a statement.

This episode comes amid a public debate on religious intolerance, triggered in August by the murder of rationalist Malleshappa Kalburgi, who had angered Hindu right-wing groups with his criticism of idol worship.

The debate was fuelled in September by the lynching of a Muslim blacksmith by a Hindu mob that thought he had slaughtered a cow, an animal considered sacred by Hindus. Over the last year, there has also been a rise in the activity of hardline Hindu fringe groups.

But Khan is not the only celebrity who has spoken up about the issue. Bollywood actor Shah Rukh Khan earlier this month said there was "extreme intolerance" in the country, while over four dozen writers, playwrights and poets returned their literary awards as a mark of protest.

Yesterday, Oscar- and Grammy-winning composer A. R. Rahman too voiced similar sentiments. Rahman recently faced a fatwa from a Muslim body for composing the music for an Iranian film. A Hindu group, considered close to the BJP, then suggested he convert to the Hinduism.

The debate is likely to impact proceedings in Parliament where an opposition, united by the recent defeat of the BJP in the state of Bihar, is looking for issues to corner the party, said analysts. The winter session of Parliament starts today.

"This Parliament session too could be a washout. Both sides will try to score political points. They are already strategising for the next round of state polls. Neither side will want to give the other side the advantage," said Dr Bhaskara Rao of the Delhi-based Centre for Media Studies.

Prime Minister Narendra Modi, in a talk on Tuesday during his visit to Singapore, had promised he would implement the goods and services tax (GST) by next year, but he has only this session of Parliament to push it through and meet the deadline.

With the previous session disrupted by the opposition, the BJP yesterday struck a conciliatory note, appealing to all parties to support the GST. "We are ready for debate on everything in Parliament, let there be debate not disruption," Information Broadcasting Minister Ravi Shankar Prasad told reporters yesterday.

But opposition parties remain unconvinced. "Aamir Khan's statement is a reflection of situation that prevails in the country. Intolerance will be an issue in Parliament. We will speak on this issue," said Mr D. Raja from the Communist Party of India.