Four volunteers were injured in a botched attempt to throw a bomb in order to scare away wild elephants in Kanchanaburi province on Saturday.

One of the volunteers threw of a ping-pong bomb when he encountered four wild elephants in Thong Pha Phum district at 5pm on Saturday but a part of the bomb fell into a bag of explosives in the bed of their pickup, triggering a big explosion.

The blast injured all four people in the vehicle, two of them seriously. The vehicle was also extensively damaged.

"Two of the injured are receiving treatment at Thong Pha Phum Hospital but two others have been sent to a better-equipped hospital because of their serious condition," Anon Thanomwong, a provincial councillor, revealed on Sunday. 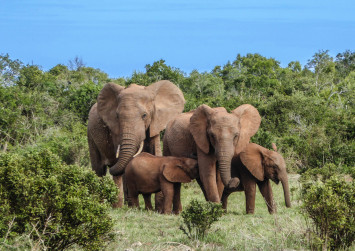 He said the four volunteers had offered to conduct patrols in the area to ease local farmers' woes, as wild pachyderms had often strayed out of the forest zones and ravaged farmland in recent years.

"One of the volunteers decided to use a ping-pong bomb because he felt threatened. Four wild elephants eating crops in a local farmland started moving towards their pickup quite fast upon noticing the arrival of the vehicle," Anon said.

Statistics reveal that human-elephant conflicts have caused increasing numbers of casualties on both sides since 2012. Overall, there have been 107 human and elephant victims over the period, including cases of fatalities. Of the total 75 were human victims.