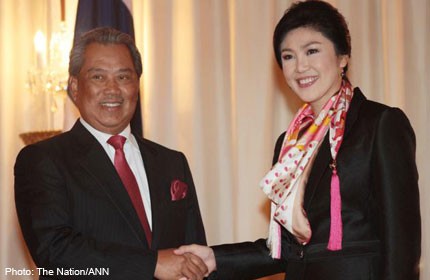 A bomb hidden by insurgents in Narathiwat's Tak Bai district and aimed at a team of escorts for teachers was found and defused, police said yesterday.

The bomb, made of 15kg of explosives with a detonation device linked to a two-way radio, was discovered near a wall of a government building in tambon Sala Mai. A gardener found it on the ground near a road where a team of Marines escorts government teachers daily.

Meanwhile, Malaysian Deputy Premier Muhyiddin Yassin Idris bin Jusoh visited PM Yingluck Shinawatra at Government House yesterday. He praised her government for starting a dialogue with the Barisan Revolusi Nasional (BRN) and said Malaysia would help push the process forward, which he said would lead to long-term peace and lasting relations between the two states.

Apart from trade-related matters, they discussed a possible joint DNA-based identification of people holding dual citizenship that travel between both nations. Yingluck said Thailand was well aware the issue was a sensitive matter on the Malaysian side and likely to take time.

Jusoh's visit was part of the first meeting of business councils of both countries and aimed at preparing for a state visit to Thailand by Malaysia's King and Queen on September 2-5.

Meanwhile, Deputy PM General Pracha Promnog, who oversees security, said a special meeting to look into five "conditions" set by the BRN for would be held today.

"We have to look at pros and cons associated with the [BRN] conditions, to find the best way out for the country while not affecting the feelings of a neighbouring country," he said.

A special memorial service, for which soil was provided by His Majesty the King, was held yesterday at the burial for imam Yakob Raimanee, of the Central Pattani Masjid, an important religious figure in the deep South who was gunned down by insurgents on August 5.

Abdul Rofah was the director of an Islamic school in Yarang district who was shot dead on August 14.

The head of a state teachers' network in the deep South, Bunsom Srithongphrai, called on teachers to stop extra activities after daily classes and go home under escort by security officials, after Abdul and a Buddhist teacher were killed recently.

Analysts suspect his killing indicates insurgents are back to eyeing "soft targets" after the end of the Ramadan truce.