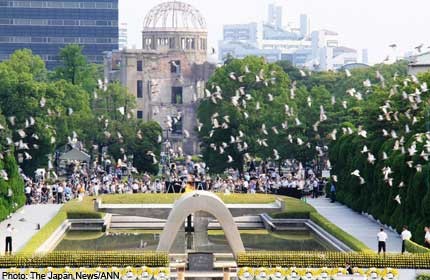 HIROSHIMA - A memorial ceremony to commemorate the 68th anniversary of the atomic bombing of Hiroshima was held on Tuesday, during which Hiroshima Mayor Kazumi Matsui and Prime Minister Shinzo Abe vowed to cooperate with other parts of the world to eliminate nuclear weapons.

At the Peace Memorial Ceremony about 50,000 attendees in the Hiroshima Peace Memorial Park mourned for the souls of the A-bomb victims and renewed the city's devotion to peace.

Experts estimate that more than 17,000 nuclear warheads currently exist in the world, with no way in sight to achieve A-bomb survivors' shared hope--a world without nuclear weapons.

In his peace declaration, Matsui used the phrase "absolute evil" to drive home the inhumane nature of nuclear weapons designed to deprive innocent people of their lives.

The mayor also vowed to make all possible efforts to realise quick elimination of nuclear weapons and the peaceful world.

The ceremony was attended by A-bomb survivors from across the nation, representatives of families of the deceased, Abe, other government officials, and delegates from 70 other countries and the Delegation of the European Union to Japan.

US Ambassador to Japan John Roos attended the ceremony for his third time.

At 8:15 a.m., the time the atomic bomb was dropped in 1945, representatives of families of the deceased rang the Hiroshima Peace Bell, and attendees offered silent prayers for the repose of the victims.

In the peace declaration, Matsui told the stories of several A-bomb survivors who suffered from physical and psychological damage, and have suffered discrimination and prejudice.

The mayor emphasised that atomic bombs, which indiscriminately deprive people of their lives and make survivors suffer physically and psychologically for life, are "the ultimate inhumane weapon and an absolute evil."

In his speech, the prime minister said: "We, the Japanese, are nationals of the only country which suffered from atomic bombs during a war. We are obliged to surely realise a world without nuclear weapons."

During the ceremony, 5,859 names of those confirmed to have died in the past year were added to the official rolls of A-bomb victims and were placed in the Memorial Cenotaph. The number of lists now stands at 104 volumes in total and the number of victims commemorated in the monument has reached 286,818.