Boracay update: How the Philippine tourist island is coping as Covid-19 disruption drags on

Tourists frolic during sunset in Boracay, Philippines, on October 26, 2018.

As with just about every other destination reliant on tourism, the economy of the Philippine island of Boracay has been devastated by the Covid-19 pandemic.

In August, Patrick Cuartero, a managing partner at cocktail bar Prisma Boracay, told the South China Morning Post that he wasn’t sure how long business owners on the island would be able to survive.

“I’ve already heard of many businesses shuttering. I’d only give it a few more months before things get critical,” he said.

Since then, the island, which has managed to remain Covid-free, has reopened to domestic visitors.

“Tourists – mostly locals and Manila-based expats – are starting to trickle in slowly,” says Maffi DeParis, the hotel and restaurant manager at DeParis Beach Resort. “It’s been fun to watch them enjoy the island during its most pristine and quiet December in decades.”

Visitor numbers are still down by a wide margin, though. According to the local tourism office, just 3,703 people arrived in Boracay between Dec 1 and 12 – fewer than the island would have received in a single day before the pandemic. This is in part because of stringent entry requirements: all visitors must have taken, within 72 hours of starting their trip, a Covid-19 RT-PCR test, which can cost up to PhP8,000 (S$222).

Some venues that have reopened, such as Prisma, are doubting the wisdom of the decision. “We reopened our bar because Hue Hotel, where we are located, reopened, but we are getting so few guests that we’d actually be better off staying closed,” says Cuartero. “We’re currently averaging about one to two drink sales per day.” 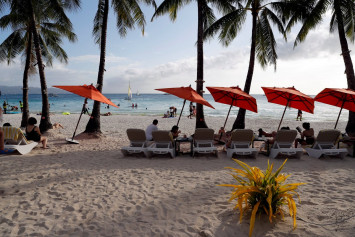 The Diniview Villa Resort has received a handful of guests in recent weeks. “However, all reservations have been made on a 40 per cent to 50 per cent discounted rate, so we are barely breaking even,” says owner Julia Lervik, who in August was concerned about her staff, because “everyone is running out of money”.

Now, Lervik, who also owns two restaurants, says: “We are trying to give our staff as much work as possible. The Christmas and New Year period will be OK for 75 per cent of our regular staff, but we can’t take back the other 25 per cent, as there is not enough work to support a full team.

Many of our staff’s spouses have lost their jobs, meaning their families suddenly have to rely on one income. These are tough times and we worry for the coming months.”

Boracay Yoga is another business that has reopened, offering daily classes again, but, says Belgian instructor Frank Hoefsmit, “Our students are all Boracay locals, and we have yet to receive our first tourist student.”

On the other hand, Spicebird restaurant, once thronged with hungry tourists seeking a taste of its piri-piri chicken, has been closed since March 16, and will remain so for the foreseeable future.

“Unfortunately, we feel that visitor traffic in Boracay isn’t enough to sustain us at this time,” says owner Nowie Potenciano, who had already closed two of the Boracay businesses operating as part of his Sunny Side Cafe Group when he spoke to the Post in August.

The following month, Potenciano opened a permanent Spicebird outpost in Manila, which, he says, is struggling despite the capital’s higher foot traffic. “Hence, we are of the mind that we will be worse off opening in Boracay right now,” he explains. “We are better off waiting for people to return.”

The upcoming holiday season offers a glimmer of hope for some. “We are anticipating an influx of tourists for the Christmas and New Year period. More restaurants and shops have been reopening their doors,” says Hoefsmit, who, as in August, is still able to find a silver lining to the pandemic.

“In the past weeks, I have enjoyed rediscovering international flavours thanks to the array of restaurants that have reopened. I took this all for granted before.”

However, this era of rediscovery for Hoefsmit may prove short-lived. “We expect visitor arrivals to dip after the holiday season,” he says.

Others are looking further ahead. “For Prisma, we’re not considering Christmas as anything special, although our hotel expects occupancy to increase towards the end of December,” says Cuartero. “We’re preparing for next year instead, and looking at alternative revenue streams such as private dining.”

“While all of us believe that a Covid-19 test should be required to enter the island, the high cost prevents tourists from coming,” she says. “We hope that a more cost-friendly solution can be found – whether through government subsidies or alternative testing methods.”

Potenciano is buoyed by vaccine developments. “I hope that the government starts making plans to welcome tourists back, especially those coming from countries that have already started mass inoculations,” he says. “In the long term, Boracay is still going to be the gem of Philippine tourism, and there is still a future for the island.”