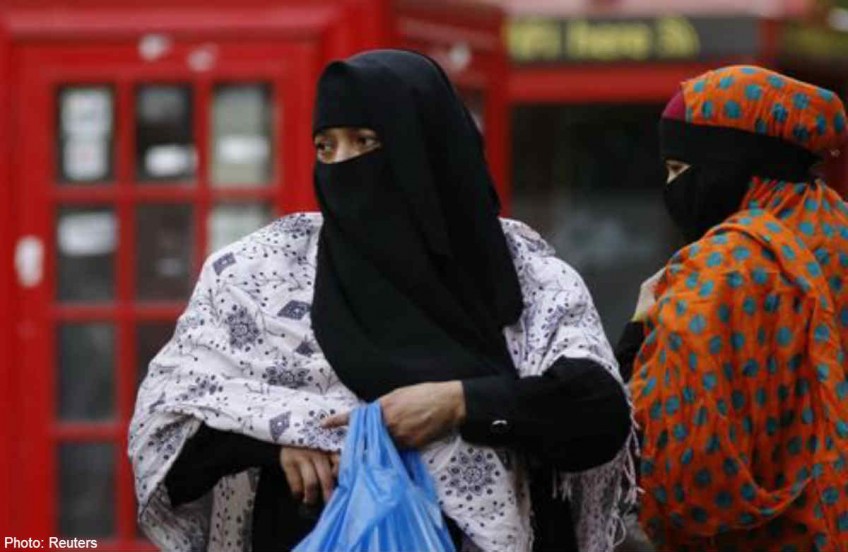 Women wear full-face veils as they shop in London September 16, 2013.

In today's liberal, tolerant Britain, a charge of racism and Islamophobia can be hugely damaging for anybody with ambitions of a career in public service.

Given this environment of political correctness, people are often afraid to speak out against migrants who act in ways that are contrary to local culture and social norms.

Thus, when the Birmingham city council began receiving reports of increasing control of aggressively Islamic elements over a number of state schools, it tended to ignore them for fear of being accused of Islamophobia, and in the interest of harmony in the largely Muslim areas of the city.

It was not until the so-called Trojan horse letter surfaced last year that the government took action.

Michael Gove, until recently a reforming education secretary, unleashed an enquiry by Ofsted, the school regulator, and another by Peter Clarke, a retired police officer who was earlier the national counterterrorism coordinator.

At the same time, the Birmingham city council commissioned its own enquiry conducted by Ian Kershaw.

While these enquiries were going on, there was much speculation in the media.

Many of the Muslim governors of the affected schools protested against what they called a witch-hunt, accusing the Conservative-led coalition government of anti-Muslim propaganda.

The Ofsted report focused in academic and administrative matters, and cleared a few of the schools while recommending that others be placed in 'special measures'.

However, the Clarke report has been far more devastating.

Among other things, it has accused the governors of these schools of bullying teachers and principals who would not cooperate, forcing many to leave; eliminating the choice of language teaching, and restricting it to Arabic and Urdu; teaching belief as fact by introducing creationism as science; subverting secularism; appointing students who would report teachers as well as other students of "exhibiting behaviour deemed unacceptable by conservative Muslims"; and racism by making white pupils feel unwelcome.

Clarke accuses the governors of trying to impose "an aggressively separatist and intolerant agenda incompatible with full participation in a plural secular democracy".

Basing his report on interviews, email correspondence between staff members, and exchanges on the social media, Clarke asserts:

"It appears to be a deliberate attempt to convert secular state schools into exclusive faith schools in all but name … There is clear evidence that young people are being encouraged to accept unquestionably a particular hardline strand of Sunni Islam that raises concerns about their vulnerability to radicalisation in the future."

For us Pakistanis, there's nothing new here: our schools have been brainwashing our children in this manner for decades, and the result is before us in the form of rising intolerance and extremism that now dominate the public discourse.

But in Britain, such indoctrination is unacceptable, and will no doubt lead to loud calls for greater supervision of schools in largely Muslim areas.

Already, there is an intermittent debate going on about the resistance to integration among mostly Muslim immigrants.

As negative perceptions about political Islam harden, the sight of women dressed in all-enveloping veils and men with long, scruffy beards causes resentment among many Brits.

Mostly, these feelings are not articulated, but the Clarke report will surely add fuel to this slowly smouldering file.

Although he has not stated that he found any evidence of attempts to teach students the virtue of violent jihad, this paragraph from his report is particularly damning:

"The all-male discussions include homophobia, highly offensive comments about British service personnel, a stated ambition to increase segregation at the school, disparagement of Muslims in sectors other than their own, scepticism about the truth in the reports on the murder of Lee Rigby (the British soldier brutally murdered in broad daylight before witnesses by two Muslims last year) and the Boston bombings, and a constant undercurrent of anti-western, anti-America and anti-Israel sentiment."

One thing to emerge from both the Clarke and the Kershaw reports is that there was a complete failure on the part of the Birmingham city council to regulate these schools, and look into complaints of their takeover in Muslim majority areas.

Governors have taken advantage of the decentralisation and empowerment of school boards to run their own affairs.

Ironically, Michael Gove, the education secretary who pushed through these reforms, has recently been demoted in a major cabinet reshuffle.

His departure will be greeted with relief by teachers' unions as he pushed them hard to improve standards.

For decades, Brits have accepted the customs, languages and culture of the millions of migrants who have moved here as political refugees or economic migrants.

They have contributed in large measure to the economy, the social services and the arts.

But in these days of economic stagnation and unemployment, there is growing resentment of newcomers who are seen as not only taking jobs away from locals, but also subsidised housing and free medical care.

The last thing an immigrant community needs in such an environment is the perception that it is teaching its children to despise the local culture and values.