BTS has spoken out against anti-Asian racism in the West, but what about discrimination in South Korea?

BTS makes statements against anti-Asian hate crimes at the White House on May 31, 2022

BTS has been the most popular South Korean boy band for years, winning major awards and topping the charts at home and abroad since their 2013 debut.

They have also become one of the most talked-about groups in the world, and not just for their music, speaking at the UN last year about the climate change struggles of young people and to US President Joe Biden in May, discussing anti-Asian hate crimes and discrimination.

But such overseas activities have prompted some compatriots to question the seven members' influence in their own countries. "BTS really should be speaking about [the] anti-discrimination law in Korea, but there is no money in that," read a typical tweet after the group's visit to Washington.

Despite an increasingly multicultural landscape, South Korea has not yet implemented a comprehensive anti-discrimination law, as seen in many other nations.

Consequently, it is not illegal or uncommon for foreigners to be banned from bars and clubs, even in the capital Seoul, or for schools to fund mental health programmes where students are discouraged from being LGBT, although the National Human Rights Commission of Korea is able to investigate and report alleged discriminatory acts and recommend non-binding disciplinary measures.

Members of the BTS fan club ARMY, which has five million followers on Twitter alone, are among those speaking out about the band's apparent reluctance to engage at home on issues they do speak up about abroad.

Many netizens have highlighted what separates South Korean celebrities from their counterparts in the US and other Western countries. While Korean stars are seen promoting the likes of Unicef and Save the Children, they rarely go on personal social media to lambast politicians or comment on social issues.

Critics are angered by this silence from people with much global clout, but analysts and fans point to the need for more understanding of the K-pop (Korean popular music) industry and social norms.

Michael Hurt, a cultural theory lecturer at Seoul's Korea National University of Arts, said K-pop management "is extremely strict in how it regulates the public appearance and the image of their groups".

This is why most stars are banned from dating, at least publicly, or having "control of their own lives". And, he said, globally it made "perfect sense" for BTS to speak out in the US about anti-Asian discrimination.

"If the issue can receive universal approval, it's great PR, but choosing a side on issues that are controversial and split-in-the-middle becomes a risky move."

In 2016 Taiwanese singer Tzuyu, from South Korean girl group Twice, was engulfed in controversy after being branded a supporter of Taiwan independence, amid images of her waving a Taiwanese flag . She was defended on Chinese social media by her agency's famous boss, Park Jin-young, or J.Y.P.

He assured fans in China, one of the biggest K-pop markets, that his company "supports the principle of one-unilateral China".

Kwon Joon-won, professor of entertainment management at Dong-ah Institute of Media and Arts, said K-pop stars should be prepared to lose "half" their fans if they make "striking" social or political statements.

"Our country is small and its corporations have had a history of fearing repercussions if they were against the agenda of the ruling administration."

Kwon said this "fear" dates back to the military regime in the 1970s and 1980s and "part of this culture and fear still unconsciously exist in society today".

Just five years ago, the culture ministry under the embattled (later impeached) President Park Geun-hye apologised for blacklisting artists known to be critics of the scandal-ridden administration .

The list contained the names of thousands of actors, writers and film directors, including director Park Chan-wook, who won an award at last month's Cannes Film Festival.

Kwon said that changing times have allowed more freedom of speech in recent years but only those "with lower levels of fame" have been able to break free from the old system.

A British member of the LGBT community in South Korea, Ray Johnson (a pseudonym), "absolutely understands" why people expect BTS to speak out on the anti-discrimination bill.

But, she said, South Korea was generally "still a very conservative place with strongly-defined social rules, which makes voicing criticism of the status quo a very risky endeavour. You only have to look at how contentious events like Seoul Pride are." 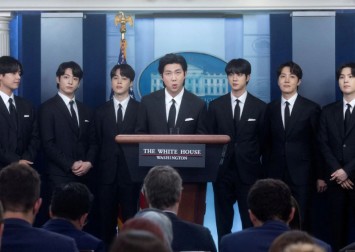 Korean fans also differ from their counterparts abroad in terms of what they discuss online, with mostly foreign fans dissecting the group's social activities - or more.

For example, it was the overseas ARMY who made headlines for disrupting then President Donald Trump's 2020 political rally in Oklahoma, reserving tickets then not showing up. They also donated over US$2 million (S$2.7 million) to the Black Lives Matter movement.

"They have addressed mental health, class divides, the economic struggles of young people and how love transcends boundaries," said the 30-year-old, a BTS fan since 2019.

The band has openly discussed same-sex relationships - in songs like 'Same Love' or in interviews - which are rarely shown or discussed in Korean media.

On Tuesday, all seven members announced, via a one-hour YouTube video, a "hiatus" to give them time to rest and for solo projects, with leader RM making a major statement about the industry.

"The problem with the whole K-pop idol system is that they don't give you the time to mature…I get up in the morning, I get my make-up and my hair done, and there's just no time left for growth," said the 26-year-old.

Johnson thought BTS fans had cause to hope, as BTS had been "working steadily to bring positive change and broach subjects often seen as taboo. It's my belief that they will continue to do so, maturing incrementally along with a positive change in Korean society".