Shocking new claims involving a nightclub at the centre of South Korea's K-pop sex scandal have emerged in an investigative report by local media, potentially implicating the relatives of well-known and powerful figures.

On Tuesday, South Korean investigative news programme Straight reported allegations of underage sex trafficking and violent sexual abuse of women taking place at Burning Sun, a club in the upmarket Seoul suburb of Gangnam that was co-owned by Seungri, a former member of K-pop band BigBang.

Burning Sun provided secret sites and services for its top VIP clientele - reportedly comprising men from powerful Korean families, including the son of a former politician - to carry out the abuse, Straight reported.

The programme, broadcast on the MBC TV channel, reported that numerous women - including underage teenagers groomed for prostitution - were drugged by club employees, before being subjected to violent sexual assault that was so severe, a discreet clean-up crew nicknamed the "incinerators" were on call to remove blood and other incriminating evidence using forensic-grade chemicals.

A police officer tasked with investigating Burning Sun was also alleged to have been in collusion with the establishment.

The continued twists in the expanding sex abuse scandal have rocked South Korea, with many social media users expressing anger over the allegations of corruption and the cultural treatment of women.

"The Burning Sun investigation will be difficult. It implicates the children of the powerful, even police, prosecutors and tax officials. This country's true nature is a history of crimes by the powerful," wrote Twitter user Bozzangg.

Citizens have started a petition to push the presidential Blue House to investigate the Burning Sun scandal. Petitions with more than 200,000 signatories require a response from the president.

Amid the outrage, many people in South Korea believe such offences are only the tip of the iceberg, said Mano Lee, a Seoul-based K-pop music critic and self-described feminist.

"I think people are horrified and disgusted by what's happening in the K-pop industry now," Lee said. "But many also insist that it shouldn't be only entertainment industry that we are questioning, but something bigger than that - the rights of women in Korean society."

Burning Sun is just the symptom. Korean society has much deeper problems about the way it treats women, and women without any power. And this has gone on for a long, long time.

With the unprecedented rise of South Korea's own #MeToo movement, and as the sex abuse scandal continues to unravel, more women in recent years have been questioning the expectation to adhere to the social norms of being obedient wives and nurturing mothers. 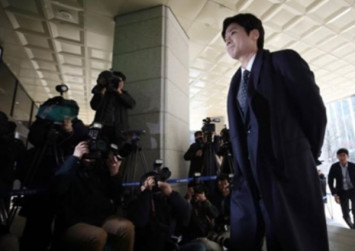 In a 2014 survey conducted by the ministry of gender equality and family, 42.9 per cent of female respondents said if they had a choice, they would choose to be born male, citing issues such as child birth, and the lack of childcare and other support for women.

The nation's patriarchal culture is among the reasons that is putting off a growing number of young women from dating, Lee said.

"This is one reason why many younger women refuse to get married or even be in a relationship with men," said 32-year old Lee, of the nation where marriage, dating and birth rates have been plummeting in recent years.

The country's fertility rate last year fell to 0.98, far short of the 2.1 needed to maintain population stability in the nation of 51 million people.

And in a country where statements such as "women must be beaten once every three days" are trivialised as offhand jokes, or as generational sayings, Lee said gender-based violence remains normalised.

According to statistics, domestic violence is a serious issue in South Korea. Last year, 279,082 cases were reported - a 74 per cent increase from the 160,272 cases seen in 2013. The dramatic rise in numbers in recent years has been linked with increased social awareness in the wake of a growing empowerment movement.

Beyond fallen K-pop stars and a reckoning within the South Korean entertainment industry, the events also bring into question the status of women in the patriarchal neo-Confucian nation.

"The K-pop sex abuse scandal is just one example of how men generally perceive women," said Gina Park, a sex educator and founder of Eve Condom, a contraceptive brand marketed towards women.

"It revealed a core problem of how women as a gender are seen within our culture - that there's a power difference within heterosexual relationships.

"Maybe this is why there's so much violence within Korean dating culture. There's no concept of sexual consent," said Park, adding that women especially are not taught they can say "no" in mainstream Korean culture. "It's sad but the K-pop scandal is going to act as a trigger for change."

Mano Lee hopes K-pop fans, known for their loyalty towards stars and financial support of the industry, will become part of this change.

"I've seen comments by foreign K-pop fans and some of them are actually aware of the issue regarding the exploitation of women, and have stopped being followers of the stars related to the incident - just like many Korean fans have," said Lee. "I believe fan attitudes are changing."

The latest claims surrounding Burning Sun come as Seungri continues to be under police investigation for his role in the sharing of illicit sexual footage in a group chat with other celebrities, as well tax evasion, embezzlement and arranging prostitution for nightclub clientele.

Meanwhile, the chat group's purported ringleader, Jung Joon-young, continues to be under arrest for filming women without their consent on 14 different occasions. Singers Choi Jong-hoon, Roy Kim and Eddy Kim are among others who have since been implicated in the scandal.