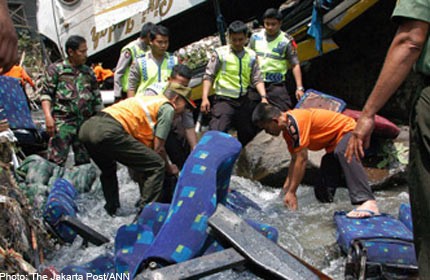 JAKARTA - The West Java Police will charge the driver of the Giri Indah bus that plunged into a ravine in Cisarua, Bogor, killing 20 people, with reckless driving resulting in serious injuries and death.

National Police analysis and evaluation division chief, Sr. Comr. Rusli Hedyaman, said on Thursday that the West Java Police accused the driver, Muhammad Amin, of violating Article 310 paragraphs 3 and 4 of the 2009 Traffic Law with a maximum penalty of six years' imprisonment and US$1,104 (S$1,410) in fines.

"The West Java Police will question the suspect after his health improves," Rusli said at the National Police headquarters in South Jakarta.

On Wednesday, the bus smashed into a parked pick up truck before the bus fell into the ravine.

The incident killed at least 20 people and seriously injured 27 others. Most of the victims were members of different churches in Jakarta who were on their way back from a retreat in a cottage in Cianjur, West Java to Jakarta.

West Java Police spokesman Sr. Comr. Martinus Sitompul previously suggested that the accident might have been due to brake problems or the bus driver's negligence.

Rusli said that the police would summon representatives of the Giri Indah bus company to confirm the suspicion that the horrific accident was caused by a brake malfunction.

"The West Java Police are coordinating with the city's public transportation agency to check on the company," he said.