Cabinet approval dips to 41 per cent after security laws pass 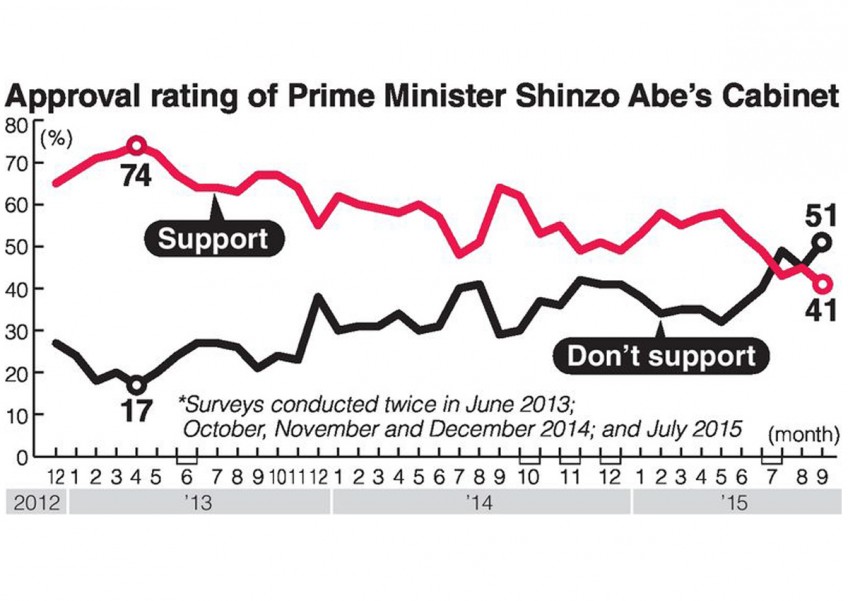 The approval rate for Prime Minister Shinzo Abe's Cabinet was eclipsed by the disapproval rate in a Yomiuri Shimbun opinion poll conducted in the wake of the enactment of security legislation.

According to the survey, the approval rate stood at 41 per cent, four points lower than that of the previous survey conducted on Aug. 15-16. In a stark contrast, the disapproval rate rose to 51 per cent from the previous 45 per cent.

This marks the second time the approval rate for Abe's second Cabinet was lower than the disapproval rate.

With regard to the enactment of the security laws, 58 per cent of respondents in the latest poll said they disapprove, while 31 per cent said they approve. Eighty-two per cent thought the explanation by the government on what is written in the law was insufficient.

The drop in the approval rate may be due to the government's inadequate efforts to have the public better understand the security laws, meaning that the government will be obliged to continue explaining what the enacted laws entail.

Thirty-four per cent of respondents think Japan's deterrent capabilities would be strengthened with the security laws now in place, while 51 per cent disagreed.

The Democratic Party of Japan and other opposition parties, on the other hand, submitted various motions - of no-confidence against the Cabinet or to censure ministers of state and others - one after another to block the vote. In regard to this, 48 per cent thought the actions were inappropriate, while 41 per cent thought the opposite.

The latest survey was conducted on Saturday and Sunday, covering 1,941 households with eligible voters using a random telephone method. Of them, 1,143 people, or 59 per cent, gave valid responses.

The Yomiuri survey also asked about the Finance Ministry's plan to pay benefits using the My Number ID system to alleviate the tax burden on shoppers when the consumption tax rate is raised to 10 per cent.

To this, a striking 75 per cent of respondents objected, while only 15 per cent approved.

The ministry plan also places a cap on benefit payments, to which 55 per cent were against and 30 per cent for.

As for introducing reduced tax rates for consumption of daily necessities and other commodities instead, 63 per cent expressed their approval, overwhelming the 29 per cent who were against the idea.

Some say reduced tax rates would complicate consumption tax payment procedures for retailers and other businesses.

However, 67 per cent of respondents who fit the category of "self-employed or freelance professionals" supported its introduction, higher than the overall approval.