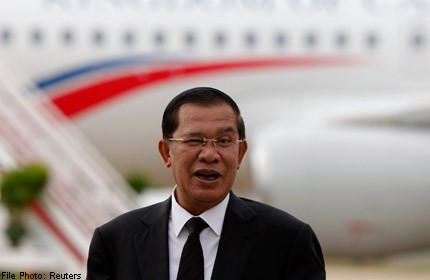 The nation has been stuck in a political impasse since Hun Sen's long-ruling Cambodian People's Party (CPP) claimed victory in the July 28 vote, with the military deployed in the capital Phnom Penh last week after the opposition threatened mass demonstrations.

The CPP took some 49 per cent of the votes, according to an AFP tally of results-by-province released by the National Election Committee (NEC).

The country's resurgent opposition, which saw its electoral fortunes boosted by the last minute return of leader Sam Rainsy from self-imposed exile, mustered some 44 per cent of the votes, the data showed.

The results did not include a seat count, which will determine which party forms the government.

The opposition Cambodia National Rescue Party (CNRP), which claims the election was tarnished by widespread fraud, said it was "strongly disappointed" and would launch an objection to the NEC results.

"We will file a complaint against the results in accordance with the law," CNRP deputy leader Kem Sokha said at a press conference.

"The CNRP wants to resolve the problems peacefully and we want to have a process that everyone can accept," he said, adding that protests "will be our last resort".

The CNRP has threatened mass demonstrations against the government if an independent inquiry with the United Nations is not held.

Authorities said soldiers in armoured vehicles were deployed in the streets of the capital Phnom Penh for safety reasons and would stay until a new government was formed, but the move was denounced by the opposition as a threat.

Hun Sen's CPP has already said it had secured an estimated 68 of the 123 lower house seats available, a 22-seat deficit from the last election but enough to edge aside the CNRP which was said to have won 55.

If confirmed, it would be the ruling party's worst election result since 1998.

The preliminary NEC results showed the ruling party won some 3.2 million of the 6.6 million votes cast in the election, with the CNRP taking 2.9 million.

He said that if complaints were received, the final tally would be announced by September 8.

While an inquiry into the election has been broadly accepted by all involved, the parties have failed to agree on the terms of operation, particularly UN involvement.

Cambodia's opposition, which has threatened to boycott parliament, last week called on the UN to help resolve the election dispute to protect "the victory" of the people.

The CNRP said Rainsy was expected to meet UN officials Tuesday in New York to discuss the poll.

While an inquiry into the election has been broadly accepted by all involved, the parties have failed to agree on the terms of operation, particularly UN involvement.

Hun Sen - who has been in power for 28 years - has vowed to establish a government under his leadership despite the opposition's allegations.

The premier, 61, a former Khmer Rouge cadre who defected from the murderous regime, has vowed to rule until he is 74.