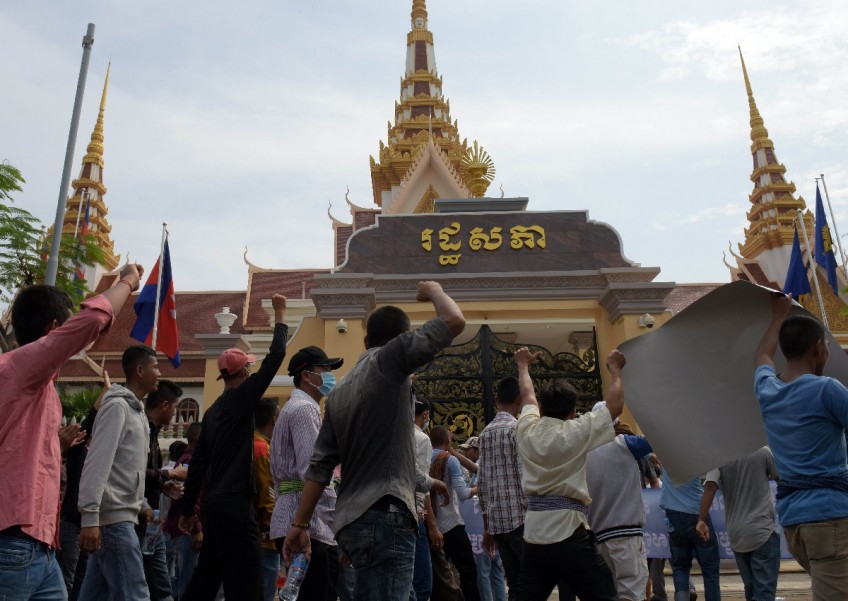 Cambodian protesters shout slogans as they march during a protest in front of the National Assembly building in Phnom Penh on October 26, 2015.
AFP

PHNOM PENH - Two opposition lawmakers were beaten outside Cambodia's parliament on Monday during a demonstration in support of the ruling party, witnesses and the opposition said, in the first case of violence since a political truce broke down in July.

The witnesses said the Cambodia National Rescue Party (CNRP) lawmakers were attacked in their vehicles as they tried to leave the national assembly, where hundreds of protesters loyal to the Cambodian People's Party (CPP) were demanding the resignation of the legislature's deputy president.

The chaos is the latest flare-up since a truce between the two big parties started to wane in July, when 11 CNRP members were jailed for insurrection, a ruling the opposition said was politically motivated. "They jumped into one of the cars and beat (the lawmaker) up until he fell to the ground and then they began to kick him,"said 34-year-old witness Em Sopheak.

He said the attack involved about 50 men who wore scarves to cover their faces and fled in two pickup trucks.

A journalist told Reuters he saw lawmakers Ngoy Chamroeun and Kong Sophea covered in blood as they were taken for medical treatment inside the parliament.

Amateur video posted on YouTube that purported to show the incident matched the accounts of the witness. It showed one of the CNRP lawmakers pulled from his car and kicked on the ground.

Reuters could not verify the authenticity of the video. "This is brutal and the perpetrators must be brought to justice," said CNRP parliamentarian Yim Sovann. "The protest this morning represented only a group of people, not the whole country." The government spokesman, Phay Siphan, said, "We don't support violence and we appeal to all sides to be calm." The pro-CPP rally was held to demand the resignation of CNRP leader Kem Sokha, whom the rally participatns accused of telling lies about the ruling party to stoke unrest.

Kem Sokha was granted the role of deputy house president as part of a 2014 political truce with Prime Minister Hun Sen, in exchange for the CNRP ending its year-long parliamentary boycott over a disputed 2013 election.

Both parties have engaged in saber-rattling of late, with Hun Sen last week warning of civil war should CNRP win the next election in 2018.