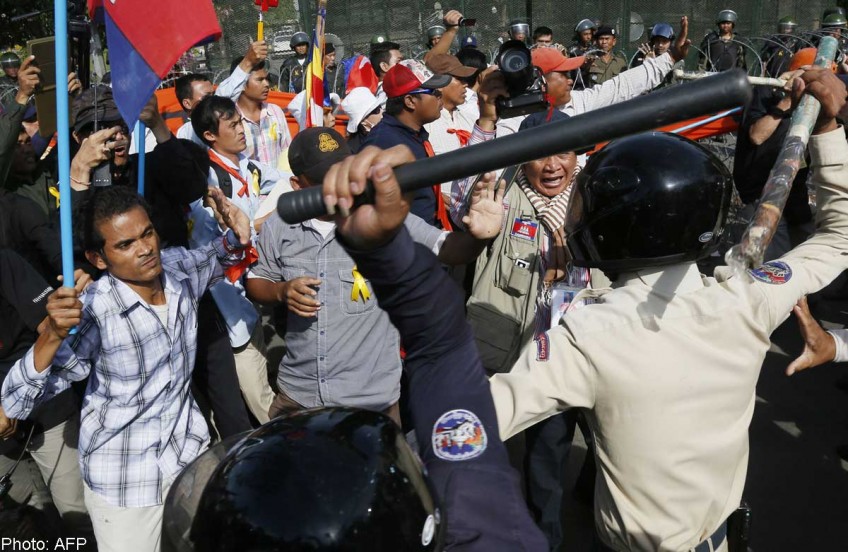 Violence erupted after around 300 opposition activists protested outside Phnom Penh's "Freedom Park" which has been closed since a bloody crackdown on striking garment workers in January.

An AFP photographer at the scene saw at least two guards lying on the ground bleeding with head wounds.

"Police then fired several tear gas bombs" to disperse the demonstration, said Am Sam Ath of the Cambodian League for the Promotion and Defence of Human Rights (LICADHO).

It was the latest opposition rally in Cambodia where authorities have responded violently to any form of public dissent in recent months.

In January police shot dead four striking garment factory employees for demanding higher wages in what activists described as the country's worst state violence against its citizens in 15 years.

Cambodia has ended a ban on public protests that was imposed after the garment workers' strike, but organisers still have to obtain permission for rallies.

Yim Sovann, spokesman for the opposition Cambodia National Rescue Party, demanded authorities release his colleagues, saying their actions were in line with the constitution.

"Authorities should not have closed Freedom Park because it is the only place for people in Phnom Penh and other provinces to protest," he said.

The park was launched in 2010 as a designated area for people to air their grievances, similar to Speakers' Corner in London's Hyde Park. But it has been sealed off with razor wire barricades since May.

There have been dozens of rallies outside it in recent months where rights groups have accused security guards, employed by local authorities, of beating protesters.

After a visit to Cambodia last month, the UN's special rapporteur for the kingdom warned of the country's shrinking democratic space.

"The barricading of Freedom Park has no justification in law and has a chilling effect on the fundamental rights of freedom of expression and assembly of all Cambodian people," he said.

"It gives the impression that there had been an attempt to put democracy in a cage." Cambodian Prime Minister Hun Sen faces mounting criticism by rights groups over the suppression of street protests intended to challenge his nearly three-decade rule following a disputed election last year.

Opposition MPs have boycotted parliament since the result and last month failed to reach an agreement with the ruling Cambodian People's Party over their demands, including calls for a new election.