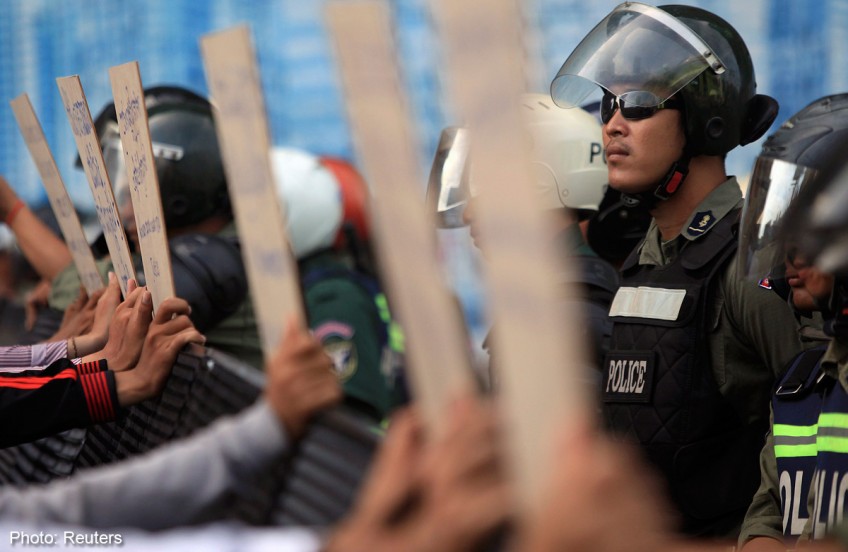 PHNOM PENH - Six Cambodian opposition politicians were charged Wednesday with insurrection, punishable by up to 30 years in prison, as their party warned of an attempt to "destroy democracy".

The activists, who include five MPs-elect, were arrested after clashes Tuesday at a demonstration against the closure of Phnom Penh's main designated protest site.

The insurrection charge alone carries a prison sentence of between 20 and 30 years.

"This is a setback for democracy in Cambodia," Am Sam Ath of the Cambodian League for the Promotion and Defence of Human Rights told AFP.

He said all six were placed in pre-trial detention.

They include prominent MP-elect Mu Sochua of the Cambodia National Rescue Party (CNRP), who has protested repeatedly in recent months against the closure of the capital's "Freedom Park".

The park was launched in 2010 as a designated area for people to air their grievances, but it has been sealed off with razor wire barricades since May.

In a message posted on her Facebook page, Mu Sochua urged supporters to continue "our fight for freedom, human rights and liberties".

The 61-year-old, who has vowed to stay in power until he is 74, has been accused by the opposition of vote-rigging.

The politicians, who have boycotted parliament since a disputed general election last year, were brought to the heavily barricaded Phnom Penh Municipal Court in handcuffs, according to witnesses.

Several hundred opposition supporters gathered at nearby police barriers to demand their release.

The opposition accused Hun Sen's ruling party of orchestrating the violence that led to their arrest.

"It's a threat against the CNRP. The move (by the court) destroys democracy in Cambodia," spokesman Yim Sovann told AFP.

A second lawyer for the opposition, Sam Sokong, said the court was also investigating several other opposition politicians, including two MPs-elect.

"The violence went beyond the implementation of freedom of expression," it said in a statement.

The protesters "committed premeditated serious criminal acts by using sticks, stones and other tools as weapons with the intention to kill local security guards", it added.

Around 300 opposition supporters joined the protest on Tuesday outside Freedom Park, which has been closed since a bloody crackdown on striking garment workers in January that left four dead.

Rights activists said some opposition supporters were also wounded during the protest, in which police fired tear gas to stop the guards and protesters fighting with sticks and stones.

There have been several rallies outside Freedom Park in recent months. Rights groups have accused security guards, employed by local authorities, of beating protesters.

The latest charges "illustrate again that the judiciary is once again used as a political tool to restrict freedom of expression and opposition voices by the government of Cambodia", said Chor Chanthyda of the Cambodian Center for Human Rights.