Cambodia's Rainsy: Aristocrat or man of the people? 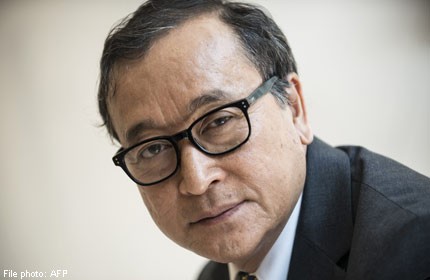 PHNOM PENH - Born into an upper-class family, Sam Rainsy began his career as a Paris-based banker but went on to become one of Cambodia's most controversial and outspoken politicians.

The self-professed democrat, who returned to his homeland on Friday after a royal pardon for charges he maintains were politically motivated, is the arch-rival of Cambodia's strongman Prime Minister Hun Sen.

While both seek to portray themselves as men of the people, they differ hugely in style, said independent analyst Lao Mong Hay, a former researcher for the Asian Human Rights Commission.

After earning an MBA from France's INSEAD Business School, Rainsy worked for various banks in Paris, joining the Paribas group in 1988 before leaving to set up his own accountancy firm.

His education and "aristocratic background" mean he is not well versed in the language of the masses, unlike Hun Sen, said Hay.

"He is a man of the people up to a point," Hay said, adding that Rainsy was the first Cambodian politician to lead workers' demonstrations for their rights in the mid-1990s.

"Because of this, many workers were and still are supporting him," he said.

Rainsy, now 64, was born in Phnom Penh. He left his homeland and moved to Paris at the age of 16, after the disappearance of his father, a politician who is believed to have been killed by government agents after a failed coup attempt.

He first became actively involved in Cambodian politics while still in Paris in 1989 as an overseas representative of Prince Norodom Ranariddh, then president of the royalist party FUNCINPEC.

Rainsy, who is married with three children, returned to Cambodia in 1992 after a major UN peacekeeping operation to stabilise the war-torn country and hold democratic elections. He became finance minister after FUNCINPEC took power.

But he soon fell out with Ranariddh - allegedly after pushing for stronger action against corruption and the illegal exploitation of natural resources - and was forced to resign after losing a no-confidence vote in parliament.

Undeterred, Rainsy founded his own political party, which was later named the Sam Rainsy Party (SRP).

While he was addressing a political rally in Phnom Penh in March 1997, assassins - whom the FBI later concluded were connected to the government - threw hand grenades into the crowd.

At least 16 people were killed. The case remains unsolved to this day, although Rainsy has in the past accused Hun Sen of being behind the attack.

Despite widespread intimidation targeting his party, the SRP came third in 1998 elections, and Rainsy became the leader of the opposition in parliament.

He fled after Hun Sen filed a criminal lawsuit against him in 2005 for defamation over his claims of involvement in the 1997 grenade attack, and was sentenced in absentia to 18 months in prison.

Rainsy, who has a French passport, was granted a royal pardon the following year and returned after taking an uncharacteristically conciliatory stance and recanting his accusations.

But his occasionally rabid anti-Vietnamese rhetoric landed him in hot water again after he made a series of strident speeches, culminating in his uprooting a border marker in eastern Svay Rieng province.

He fled Cambodia once again in 2009 and was sentenced in absentia to two years in jail in January 2010 for inciting racial discrimination and intentionally damaging border markers.

He was given an additional 10 years - later reduced to seven - in 2010 on charges of spreading disinformation and publishing a "false map" of the border with Vietnam.

Rainsy was handed another two-year jail term in April, 2011 for claiming Cambodia's Foreign Minister Hor Nam Hong had been a high-ranking member of the Khmer Rouge regime.

In March he branded Hun Sen a "coward" for barring him from running in the upcoming election.

Analysts say its chances of defeating Hun Sen in elections on July 28 will be helped by Rainsy's return, although the strongman premier appears confident of re-election.

Rainsy's reputation will get a boost from his "coming back against all odds", said Hay.

"He'll become even more of a leader of a political force to reckon with."