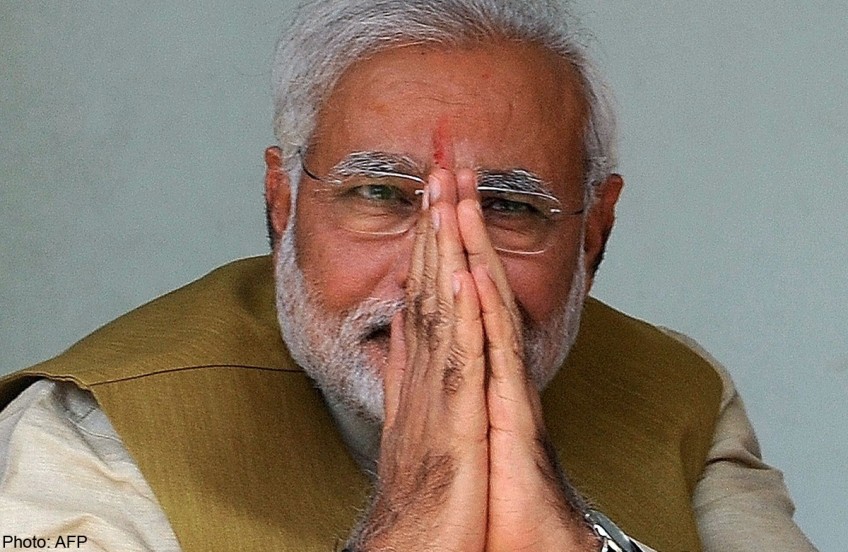 KANPUR, India - Standing on the banks of the river Ganges a day after his election triumph, Prime Minister Narendra Modi vowed to succeed where numerous governments have failed: by cleaning up the filthy waterway beloved of India's Hindus.

From a prime minister already known for the scale of his ambitions, it was a bold but calculated promise to improve the health of what the deeply religious leader referred to as his "mother".

Success would pay huge dividends in endearing him further to his core Hindu supporters - and correcting the long-standing neglect of the river would perfectly demonstrate his fabled administrative skills.

But nowhere is the scale of the challenge more evident than in the northern town of Kanpur, around 500 kilometres (300 miles) from the capital, which is known for its large leather-treatment industry.

A river believed to cleanse sins is used here as a giant sewage line for the largely untreated excrement of five million residents and a disposal facility for millions of litres of chemical-laced industrial waste.

Some devout pilgrims still brave the obvious dangers of submersing themselves in the water, in which fecal coliform bacteria can be 200 times the safe limit, according to local authorities.

But even they are increasingly put off. Local boatman Vijay Nishad, who has been rowing religious visitors on the river for more than 15 years, says his business is suffering.

"Around 100 or 200 people came to bathe this morning but they left without going in the water because of the dead fish and the terrible stench," he told AFP as he oared his boat.

Nishad put his hand into the soil-coloured waters and plucked out a few small fish floating lifelessly just below the surface.

The Ganges snakes for 2,500 kilometres across northern India from the Himalayas to the Bay of Bengal through a basin that is home to an estimated third of India's population - 400 million people.

Kanpur is one of the four most critically polluted spots which also include the holy city of Varanasi from where 63-year-old Modi was elected to parliament for the first time in May.

Rakesh K. Jaiswal, founder of Kanpur-based campaign group Eco-Friends, told AFP the city produced 500 million litres of sewage a day, and had a capacity to treat only around 160 million litres.

A recent note from the environment ministry, seen by AFP, estimated that the capacity of sewage treatment plants in the 50 biggest towns along the river was only 1.2 billion litres daily. Total human waste totalled 2.7 billion litres.

Jaiswal wishes Modi and his newly named Minister for Water Resources and Ganga Rejuvenation Uma Bharti well, but he is sceptical that significant changes can be made in their five-year term.

India's first highly publicised effort to clean its most sacred river was in 1986, when the Ganga Action Plan was launched.

Environmental activists estimate billions of rupees have been poured into clean up efforts over the last three decades with few, if any, results.

"It is the first time I have seen one issue uniting people from across the board. Everybody is united and working with unseen enthusiasm for this campaign," minister Bharti told a conference on the river on July 7.

While the lack of sewage facilities in Kanpur is an administrative failure common to most towns along the river, the industrial waste problem is particularly acute here.

Kanpur has been a centre of the leather trade since the early 1900s when it evolved as a major domestic handloom and leather hub under British colonial rule.

A sometimes overpowering stench of rotting flesh fills the air in the city's tannery-dominated Jajmau area.

Workers, mostly poor-illiterate daily wagers, work barefoot without any protective gear as they remove the skins and send them off for chemical bleaching, colouring and drying.

That the leather industry is owned and run by Muslims and those clamouring for a clean up are Hindu nationalists gives the new government's operation an important religious hue.

The heavy metals and other pollutants kill river life and enter the food chain through use of the same water for irrigation and the local fish consumed by local villagers.

"Modi government's intent is definitely a good sign," Neeraj Srivastava, a coordinator of the Kanpur administration's efforts to clean and develop its river stretch, told AFP.

"A lot has been tried since 1986 but I think we've lacked a technical focus and coordinated effort. We have to do it now," he said.

In the typically poor village of Jaana on the outskirts of Kanpur, the public health effects of 30 years of inaction can be seen.

Malti Devi, a 33-year-old homemaker and mother of three, said she developed severe rashes soon after she moved there after her marriage.

"It became severe and then I got these permanent rashes all over my body," Malti said, as she revealed red sores on her arms, stomach, upper back and neck.

A group of half a dozen villagers gathered outside Malti's small, brick house when AFP visited, eager to describe their own problems which they linked to the water.

"Those who can, have already left the village," 40-year-old Ramesh Chandra Nishad said.

Senior medical authorities in the area backed their claims, blaming the rashes and other ailments on contact with the water.

For Devi, Modi's operation is welcome, but like others, she has heard ambitious plans from politicians before.

"I doubt if anything will happen," she said.