After South Korean speedskater Kim Bo-reum finished second in the women's mass start final event Saturday, she gave a deep bow on her knees to the crowd from the ice.

Many Korean athletes have done the same in the past at the Olympics as a way to show gratitude. But for Kim, who had been labelled a "bully" after leaving a teammate behind during the women's team pursuit preliminary event on Feb. 19, it was a way to show her remorse -- an apology.

"I didn't think about winning medals during this (mass start) race," the silver medalist told reporters, through tearing eyes. "The only sentence I can think of saying right now is 'I'm sorry.' I'm really sorry." 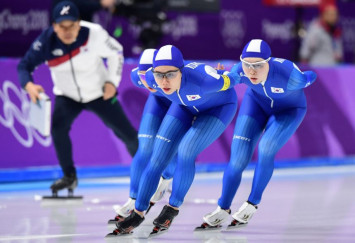 Prior to her silver win, more than 600,000 South Koreans, believing Kim had bullied teammate Noh Seon-yeong, had filed a petition with the country's presidential office to expel her from the national team.

It was Kim's brief TV interview where she blamed Noh for their disappointing results in the team pursuit race that had triggered the torrent of online criticism against her. Even after Kim's repeated public apologies and her silver win, the controversy still grows, with some Koreans filing another petition asking the presidential office to take away her medal. In response, others have claimed that such public criticism is emblematic of misogyny.

"This is a case of collective madness," wrote author and feminist critic Yun Dan-woo on Twitter.

"And this case inevitably involves misogyny. The city of Jeonju has a population of 650,000, and Bhutan 690,000. A huge number of people, as big as the entire population of a city and even a nation-state, has come together only to expel a female athlete over her 'attitude' problems. This is scary." These critics say no public petition as big as the ongoing one against Kim has been organised for the "attitude problems" of male athletes.

In December, five professional Korean male swimmers, accused of installing a spy camera in a women's changing room and secretly filming female members of the squad at their training facility, were found not guilty. The ruling has been questioned by feminist activists, as the court's decision was made although one of the swimmers had confessed to committing the crime. No public criticism at the scale of that against Kim Bo-reum has taken place since the allegation surfaced in 2016.

At the same time, Yun Sung-bin, who became South Korea's first Olympic skeleton champion at PyeongChang, also has been criticised for his social media posts uploaded some five years ago for using vulgar and often misogynistic language.

"Yun never had to apologise and no such public uproar took place against him even after his posts from the past were revealed to the general public," wrote a Twitter user. "With the case of Kim Bo-reum, people don't seem to care about the core of the problem, but are only interested in ostracizing a single athlete from society."

Others have compared the ongoing controversy to the case of Ahn Hyun-soo, or Viktor An, the South-Korean born short track speedskater who defected to Russia in 2011.

An, who won three gold medals in the 2006 Winter Olympics as a South Korean skater, decided to obtain Russian citizenship after claiming that factional divisions within the Korea Skating Union had made it impossible for him to continue his training in Korea.

Due to alleged factional disputes within the organisation, where favouritism and power struggles had led to skaters turning on one another, it was rumored that An also had been bullied by fellow male skaters. He reportedly had to train with female skaters after his teammates refused to train with him for men's relay events.

"Do we even remember the names of the male skaters who bullied An at the time?" posed a Twitter user. "Did any of those skaters get such criticism on a national scale? I'm not saying what Kim Bo-reum did was right, but were her actions any worse than the male teammates of An in the past?"

Some pointed out that only about 176,300 have signed a petition against Lee Yoon-taek, artistic director of one of South Korea's top theatre groups, who has been accused of multiple sexual assaults, including rape.

"A young skater is getting this massive criticism for her attitude and character, so much more so than a powerful man who has been accused of sexually abusing women multiple times," said Park Hyun-ah, a 33-year-old professional in Seoul. "I don't know if this is normal."

Whether this is a case of misogyny or not, some feel Kim does not deserve the amount of criticism she's received since the controversial team pursuit event. Before her silver-winning race in the women's mass start, she was virtually forced into a public apology at a live press conference broadcast nationwide.

"Even though we cannot ignore the 'attitude' of those who are representing our own country on a global platform, sometimes the culture of our country goes to an extreme extent and ignores the context of the argument," said Joon Kim, a reader of The Korea Herald.

"Did the athlete deserve to go through the public conference and be publicly humiliated before the race? I really felt quite frustrated at how this matter has been taken out of context. I am in no way condoning the actions of Kim against Noh, but it should have been handled another way considering the action of what society is doing at the moment."

Despite the criticism of misogynist motivations, many South Koreans still think Kim does not deserve to represent her country. A second petition, asking the presidential office to take away Kim's silver medal, was signed by 42 people as of Sunday afternoon.

"If Kim Bo-reum has any conscience, she wouldn't have accepted the silver medal," said one of those who signed the petition.

Some claimed the ongoing petition is their way of showing support for Noh, who wanted to dedicate her performances at the Olympics to her late brother's memory. Noh's brother, Jin-kyu, was a world record-holding short track speedskater, but died of bone cancer at age 23 in 2016.

"Of course the silver medal has to be taken away from Kim Bo-reum," said another person who signed the petition. "Those who are against the idea of taking her medal away, imagine yourself or your kids being in Noh Seon-yeong's position. It's a shame we have to pay tax money for athletes like Kim. If we don't take her medal away, there will be another victim like Noh."

"The country went through a rapid economic development and democratization in an extremely short period of time," Youn told The Korea Herald.

"And what we are still lacking, in spite of such achievements, is civic awareness and responsibility. People easily criticise others for their wrongdoings, especially anonymously online, but they don't necessarily have such high moral standards for themselves. If they did, such massive criticism against a single athlete wouldn't have taken place."

South Korea ranked 118 out of 144 in gender equality last year, according to the World Economic Forum.