Two leading transport companies in Hong Kong have refused permission for an advert showing a same-sex couple to be displayed, the Post has learned.

The advert, which showed two men strolling hand in hand along a beach, was part of a broader Cathay Pacific Airways rebranding campaign called Move Beyond and was intended to highlight the airline's attitude to diversity.

Both the Airport Authority, which runs the city's airport, and the MTR Corporation rejected the LGBT content, according to two sources familiar with the matter.

Several other adverts from the rebrand were on display in prominent sites across Hong Kong, including one of Asia-Pacific's largest LCD screens at Sogo mall in Causeway Bay and major MTR interchange stations including Central. The sources said the LGBT advert was the only one from the campaign not selected to be displayed at the station.

A Cathay Pacific spokesman declined to comment on the advert not being shown on the MTR but was unapologetic about its message of diversity.

"We embrace diversity and inclusion. We are very diverse and our customers are too," the spokesman said.

In an earlier interview with the Post about the rebrand, Cathay Pacific CEO Rupert Hogg had said: "The inclusion bit is really important.

"No matter who you are, when you come to work at Cathay Pacific … we want you to be who you are and feel really comfortable and be a productive part of the team and that's what we strive for."

The airline also told staff at an internal meeting that one of the key messages of the rebrand was to "fly with pride for our LGBT community allies". An MTR spokeswoman said advertising bookings for most its lines were handled by an outside agency, French company JCDecaux.

She reeled off a list of explanations surrounding the acceptability of LGBT-themed advertising, saying "clients should follow the contract terms and conditions and agency's guidelines, to ensure the advertisements comply with the laws of Hong Kong as well as codes of practice in the advertising industry".

JCDecaux pointed out two clauses in the contract stipulated by the train operator. One stated adverts would not be accepted if visual content was "immoral; or which offend the generally accepted standards of public decency or the social or cultural standards of the society".

The MTR clause went on to say content "which … in any way caus[ed] discomfort, fear, distress, embarrassment or distaste to the public" would be rejected.

Another clause said adverts could be blocked if they "in any way … incite social controversy, whether arising immediately or occurring anytime afterwards".

"The [same-sex couple] advert from Cathay Pacific came with a series of options," a JCDecaux spokeswoman said. "Therefore alternative visuals were used in this campaign." A spokesman for Hong Kong airport's operator said it had established guidelines but did not specify what they were.

"The [LGBT] visual was not included in the materials submitted to the [authority]," he said.

He declined to comment further when asked whether the authority would accept the advert.

The spokesman added the authority supported the objectives of the Equal Opportunities Commission.

The Office for the Communications Authority said there were no restrictions on LGBT advertising.

Hong Kong is conservative on topics such as LGBT rights and does not recognise or permit marriage between two people of the same sex, an issue that has sparked court challenges in recent years, despite more liberal attitudes prevailing in recent years in the city and abroad.

The city's LGBT community called on the government to follow Taiwan's lead after the self-ruled island on Friday became the first place in Asia to legalise same-sex marriage. 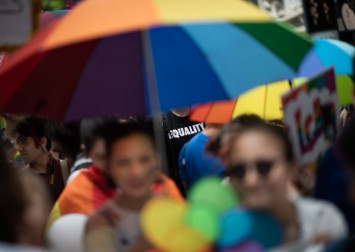 Hong Kong's first openly gay lawmaker Raymond Chan Chi-chuen said he could not see a problem with the advert that he felt carried a message of tolerance and inclusivity that was in line with the government's educational campaigns.

"The MTR and the Airport Authority should allow this advert to be shown," Chan said. "If either denies showing the advert, then an official explanation must be given.

"Which law or regulation does this advert fail to comply to? Is there an internal guideline from either the MTR or Airport Authority that does not allow LGBT-friendly ads?

"How can they have such a ridiculous and arbitrary censorship system in place? The public needs to know how this censorship comes to be."

Fern Ngai, CEO of Community Business, a not-for-profit organisation dedicated to enhancing corporate social responsibility, said: "The advertisement is a reflection of Cathay's real customers [and wider society], which include the LGBT+ community.

"It's important for companies to do this and not just continue to promote heterosexual or other stereotypes."